We’re In The Endgame Now

We’re In The Endgame Now 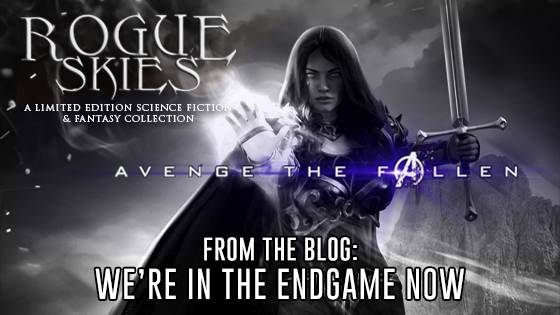 “We’re in the endgame now…” Unless you’ve been living under a rock for the past year or so, you have probably heard these words uttered by the mysterious Doctor Strange at the end of Avengers: Infinity War. Many speculated that ‘Endgame’ could be the name of the next Avengers film and they were correct!

Avengers: Endgame is due in theatres April 26th and is already projected to be the highest-grossing domestic opening of all-time, even beating out Avengers: Infinity War which grossed $257.6 million! Experts have suggested that Endgame, which is already seeing massive presales, could gross anywhere between $260-$300 million!

Endgame marks a huge change in the Marvel Cinematic Universe as it will be the last phase three film in the MCU.  This could mean lots of characters we’ve grown to know and love will not be gracing our screens again. The stakes are higher now. Many fans are speculating that Captain America, Iron Man or possibly both Avengers could bite the dust, so to speak. Theories about Endgame have been running rampant since moviegoers left Infinity War theatres last summer! Will the heroes go back in time? Will Antman save the day? Does the Quantum Realm have a bigger part to play? The ever-expanding mythos of Marvel only helps to fuel more theories as fans go deep into the comic books, analyse dialogue from previous films, and try to decipher clues from the Russo brothers.

In phase one, way back in 2008, we met the snarky billionaire Tony Stark and watched as he became our beloved Iron Man. We then went on to meet our other key heroes: Captain America, Thor, and The Incredible Hulk, and Black Widow.

We then shifted to phase two and our solo heroes had assembled into an unstoppable force, Phil Colson took a trip to Tahiti then came back to lead S.H. E.I.L.D. Hydra slithered out into the open, The Winter Soldier gave Cap a run for his money, and magic was introduced thanks to Wanda Maximof aka Scarlett Witch. It’s here that we began to see more of a tonal shift. This is when the idea of the Avengers being earth’s mightiest heroes started to tarnish, especially for Tony. This is when Thanos and his lust for the infinity stones became more apparent, and the stones themselves also become more relevant to each movie’s storyline. We also get one of my favorite and one of the most powerful Avengers, Vision!

By phase three we’ve gone gritty with more intense battles, rivalry between our heroes, new and younger heroes being introduced, and a slight shift toward space with the introduction of The Guardians of the Galaxy.

Endgame also marks the second to last time we’ll see the late Stan Lee make one of his famous cameos. It truly is the end of an era!

While we may be saying goodbye to old favorites Marvel still has plenty of stories to tell. Phase four is slated to take us even farther into the cosmos according to Marvel Studios president Kevin Feige who is interested in bringing some characters to life that many may not have heard about before. We’ll also be seeing some sequels starring a few of our dusty friends from Infinity War starting with the loveable Peter Parker in Spiderman: Far From Home hitting theatres June 5th, followed, presumably, by Black Panther 2 and Doctor Strange 2. Guardians of the Galaxy 3, which had been in limbo with the firing of director James Gunn, may also be a part of phase four as it has been reported that Gunn has been reinstated. This may not happen until late in the game though since Gunn had already agreed to take on a Suicide Squad sequel for Warner Bros. With Disney acquiring Fox, and with it, the X-men, the future of the MCU still looks bright indeed.

We won’t know anything for sure until we watch Endgame on April 26th. If you’re looking to score tickets for opening night, you may want to ask fast. Fans were in line, both at theatres and virtually on booking websites, early April 2nd securing their spots for this monumental event. Pre-sales have already set records for Fandango, Regal, AMC, and Atom, with Avengers: Endgame beating out Star Wars: The Force Awakens and Star Wars: The Last Jedi as the fastest selling and most sought after pre-sale tickets. Thankfully I did manage to snag my ticket, but many may be forced to see the film later into the weekend as theatres sell out of opening day seats and ticket booking sites experience server overloads! Any way you look at it, Avengers: Endgame will be THE movie of the summer, and possibly, the year!

While it may be the end of an era for Marvel fans, the authors of Rogue Skies are just getting started! Rogue Skies will feature 25 action-packed stories for less than a dollar!

If you haven’t picked your copy up yet, you can do so at the link below!