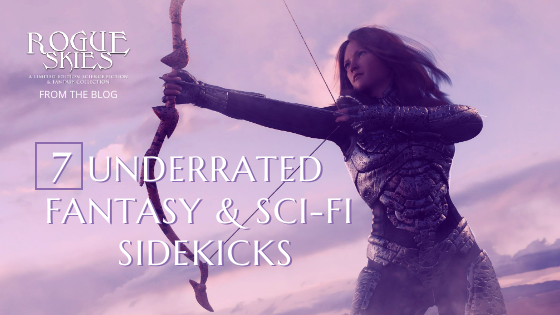 Being the youngest son in a family of 7 children is hard enough; being best friends with the famous Harry Potter can only extend the shadow that you exist in. Still, Ron Weasley has stood by Harry’s side more times than we can count and was extraordinarily brave in the books. Now, some would say the first instance of his bravery was when he sacrificed himself in the giant chess game at the end of Philosopher/Sorcerer’s Stone, but I’d like to argue that his first brave action was befriending Harry in the first place before he even knew Harry as The Boy Who Lived. Ron even offers some of his food before Harry buys the entire trolley! In their second year, it is Ron, along with Fred and George, who rescue Harry from the Dursleys. Ron also braves his greatest fear, spiders, when he goes with Harry into the Forbidden Forrest and talks with Aragog and his children. During the trio’s third year, Ron stands on a badly broken leg inside the shrieking shack to defend Harry against Sirius Black who they all thought to be a murder, and although the line was given to Hermione in the film, he utters my favorite line ever: “If you want to kill Harry, you’ll have to kill us too!” During the Tri-wizard Tournament, Harry and Ron are not speaking to one another, but Ron still gives Harry the tip about dragons being the first challenge. In fifth year Ron followed Harry into the Hall of Prophecy at the Ministry of Magic where he fought numerous deatheaters and was attacked by a tankful of mysterious brains with tentacles, for which he still bears the scars. In their sixth year, Ron pledges to help Harry hunt down Voldemort’s Horcruxes. In what would have been the gang’s seventh year he does indeed go Horcrux hunting with Harry and Hermione, leaving his family behind,  and eventually destroying Slytherin’s locket after pulling Harry from the lake in the Forrest of Dean. He then goes on to fight in The Battle of Hogwarts where he reminds Hermoine to save the house elves. Eventually, Ron becomes an Auror. Pretty good for a sidekick, I’d say!

Whenever the residents of Mystic Falls need some Witchy-woo-woo Bonnie Bennet is the one they call, and for good reason. Bonnie is a descendant of Qetsiyah, who was the original witch and who first created vampires. In addition to being a powerful witch, Bonnie’s real super-power lies in her immense sense of friendship. Bonnie is constantly putting others before herself and does her best to be there for her friends anytime they need her. This does not come without heartache. She lost her Grams while helping Elena, Damon, and Stefan escape a sealed tomb. Bonnie even goes as far as to fake her death when an ancient psycho vampire named Klaus comes after Elena. In later seasons, Bonnie becomes the anchor between the living and the dead and suffers great pain whenever a supernatural being crosses over to the other side. While there are too many instances of Bonnie sacrificing her happiness or even her life for others to name, we definitely think you should give The Vampire Diaries a try, if you haven’t already. 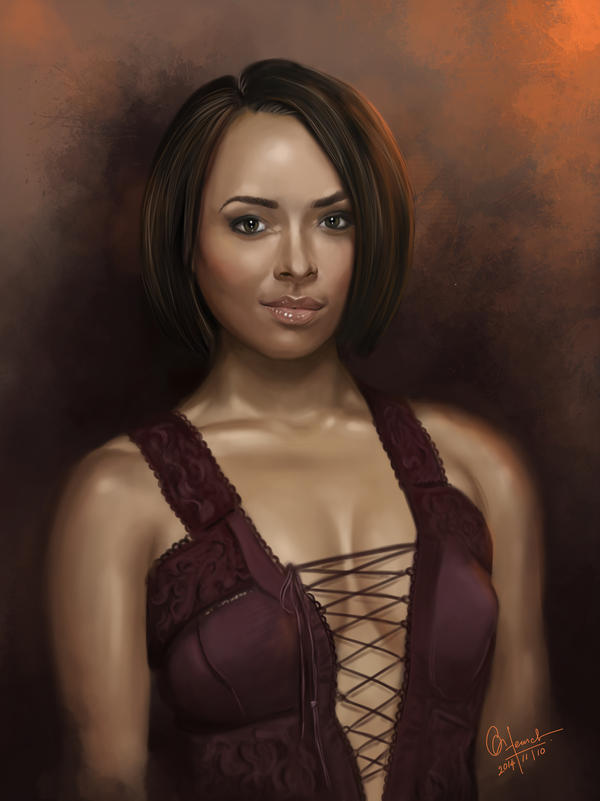 If there is one fictional character that I find most underrated, it has to be Doyle from Angel. Even though he was only in the first half of season one, his legacy carried through many of the remaining seasons. Doyle was Angel’s first link with The Powers That Be.  He had visions that were often painful, with flashes of violent images, usually of someone or something in danger. Doyle’s status as a half-human half-Brachen demon helped him withstand the toll of the visions, which he then delivered to Angel. At first, Doyle was a little reluctant to risk his neck, but soon falls in love with Cordelia and develops a solid friendship with Angel, which makes him more comfortable stepping into his more heroic side. In his most heroic moment, Doyle sacrificed his life by disabling the Beacon, a weapon that could kill any being tainted with human blood. A horde of militant demons from his past, called the Scourge, has set up the beacon in an attempt to purify the world from all half-breeds. Just before he jumps onto the beacon, he kisses Cordelia, transferring his visions and his mission to her. His death is the first devastating loss that team Angel endures and it sets them down a path toward the will of The Powers The Be for the rest of the series. 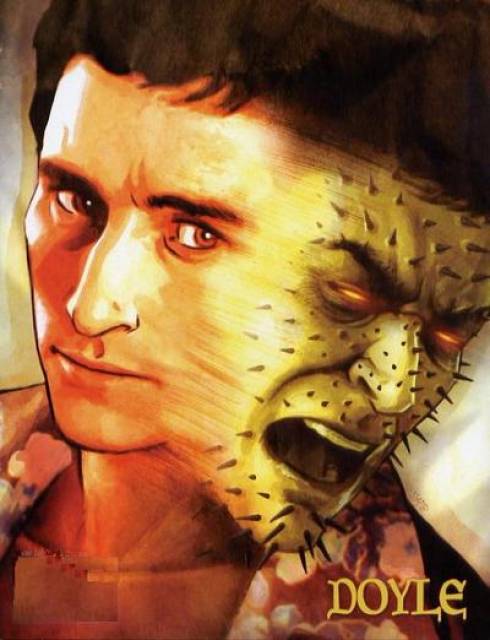 Johanna is a character we meet in the second Hunger Games novel, Catching Fire. At first, she appears to be an enemy, especially since we’re looking through the limited point of view of skeptical Katniss. It is later revealed that Johanna was recruited by Haymitch to protect and help Katniss. In the Third Quarter Quell, she brings Beetee and Wiress to Katniss so they can enact Betee’s plan to electrocute the other victors. Later, Johanna knocked Katniss out and cut the tracker out of her arm so that the Capitol would think Katniss was dead. While Katniss and a few of the other victors are rescued by the rebel forces, Johanna and Peta are captured by the Capitol. She is tortured for several months, being soaked in water and then shocked. District 13 finally does manage to rescue Johanna, and she begins training to fight for against the Capitol. There she becomes closer with Katniss, though she has a fear of water that keeps her from bathing and from participating in the final battle. 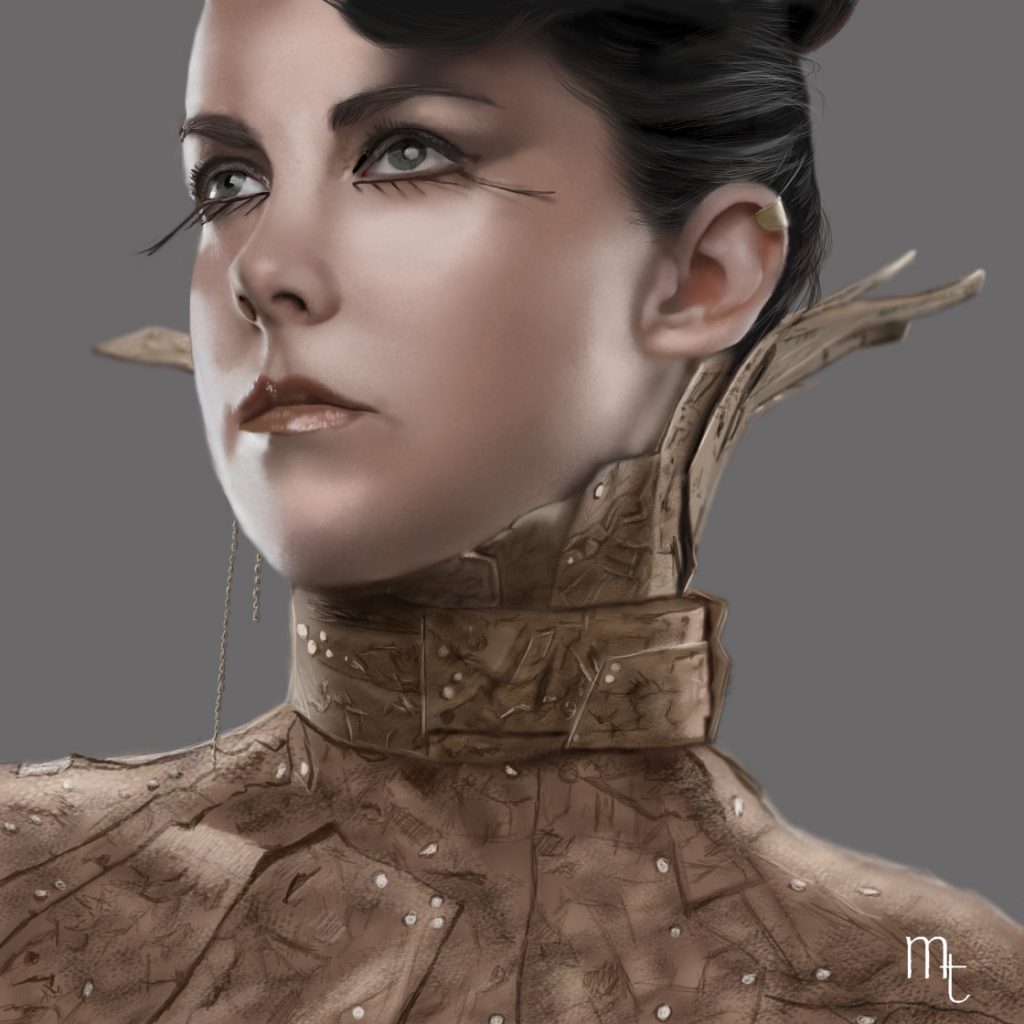 Donna Noble traveled with the tenth incarnation of the Doctor, and as the sassy red-head will tell you, she’s not your mate, sunshine! But despite her protests and her often catty humor, there’s no doubt that Donna Noble is a great friend to the Doctor, and to others in general. Donna acted, in many ways, as the Doctor’s humanity at a time in his life when it was hard for him to invest his heart into anything. The Doctor traveled with Fonna after he lost Rose and after he destroyed Martha’s life as she knew it. He was feeling guilt, and anger, and remorse in equal strides. And with all these feelings stirring inside the Doctor, Donna taught him how to care again. She persuaded him to save Caecilius and his family from the fires of Pompeii. She reminds him that he needs someone to stop him when he’s gone too far. She helped the Doctor protect the Ood, and in doing so, learned of her fate to become the DoctorDonna after absorbing the Doctor’s regeneration energy. She fought her way through the parallel universe to meet Rose and deliver her message, Bad Wolf, to the Doctor, thus reuniting the Doctor and Rose. After becoming the DoctorDonna, she also disarmed the reality bomb and disabled the Daleks’ circuitry controls, restoring all 26 planets back to their rightful places in the universe. And then, the worst thing of all happened… in order to save her life, the Doctor was forced to make her forget that she was the savior of the universe, the most import woman of all time. If that doesn’t get her a nod on this list, I don’t know what else could! 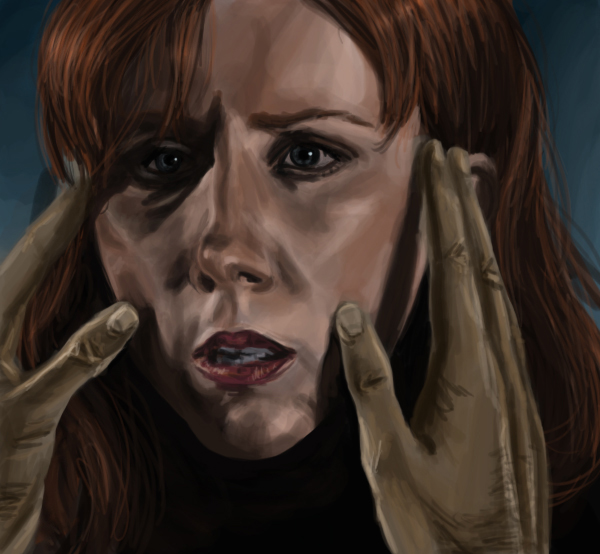 Now some would put Sam in this spot, but I think, (finally) over the years, Sam has come to be known as the hero of the books, yet no one really talks much about the essential roles Merry and Pippin had to play within the story of The Lord of the Rings. Don’t get me wrong, Samwise Gamgee is my favorite literary character of all time, but I want to give the spotlight to these two little hobbits who also made a big difference in the fight against Sauron.

To start with, Merry and Pippin were responsible for rallying the Ents and destroying Isengard, forcing Suramon out of his stronghold. And then the two hobbits travel to Rohan where Merry becomes squire to King Theoden. Pippin then peers into the palantír and is seen by Sauron who mistakes him for the ringbearer forcing Gandalf to take the hobbit to Gondor. Pippen then pledges his fealty to the acting steward, Denethor II and becomes the Guard of the Citadel. In the movie, Pippin lights the first warning beacon to signal to Rohan that Gondor needs aid, though this does not happen in the books.

Back in Rohan, Merry disregards King Theoden’s wishes and, along with the soldier Dernhelm, who was actually Éowyn, charges into the Battle of the Pelennor Fields.  Before long the Nazgul attack the riders and together, he and Éowyn vanquish Witch-king of Angmar who can be killed by no mortal man. A hobbit and a shieldmaiden do just fine though 😉

Meanwhile back in Minas Tirith Denethor, thinking all is lost and mad with grief, attempts to burn himself and his unconscious son, Faramir, on a funeral pyre, from which Pippin rescues Faramir and Denethor flings himself from Minas Tirith to his death. Pippin then rides with the Army of the West on the Black Gate to distract Sauron as Frodo and Sam destroy the ring at Mt. Doom. 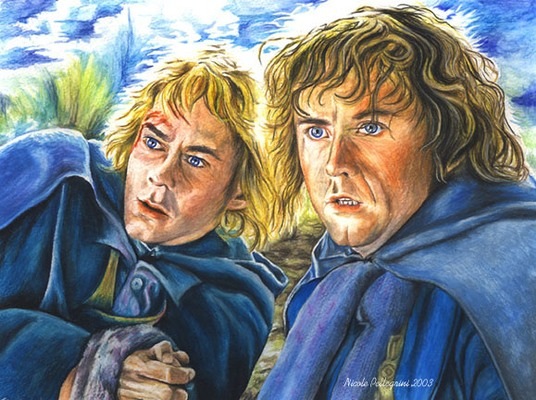 Every hero needs a sidekick!

Discover the sidekicks of Rogue Skies today!
25 books for just $0.99!