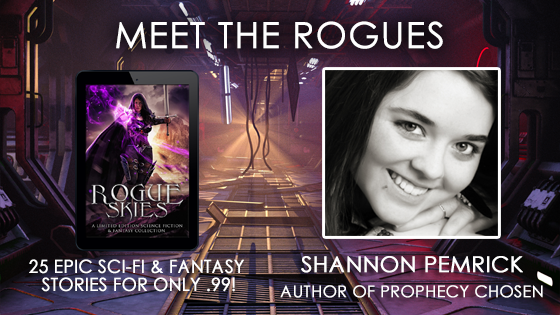 Tell us a little about yourself.

Hi, I’m Shannon. I’m from the southeast corner of New Hampshire where I live with my overly sarcastic husband and 5 four-legged critters. I write fantasy and science fiction with strong heroines, bold heroes, and romantic subplots (sometimes main plot) and in my free time, I collect novelty mugs and shiny things (my husband says I have a problem), and geeking out over rolling dice in D&D or getting lost in my favorite RPGs. I also maybe be… most definitely am, dragon-obsessed.

My path to being an author was a gradual one. And one that I didn’t intentionally pursue at first. I struggled with reading and writing comprehension as a child (and still affects me to this day), so writing books was never something I ever once dreamed I’d end up doing. I always thought I’d do something in the arts, not realizing writing was an art form all its own.

I loved telling stories to my friends. We’d all sit around and come up with something on the spot and sometimes even craft crazy stories together. As I got into my early teen years, I started writing the stories down and would exchange them with friends. It was such a casual progression. I hadn’t even realized how much I did it until someone made me reflect in my last year of high school. This person was a teacher of mine, who’d been so impressed by my writing skill for an assignment (the hero’s journey). I’d quite enjoyed the project, and it made me realize how much I’d come to love writing. But even with that love, I never thought I could write a good book like the ones I’d read.

Until I was in college and I’d finished my first book. My boyfriend (now husband) read it and insisted I needed to get it published. I resisted the idea at first, but as he persisted, I changed my mind. And I’ve had quite the wild ride ever since

Oh, so much inspiration. From my own experiences (abusive relationships, depression, etc…) to hardships I’ve seen others go through. There’s so much inspiration out there to craft 3-dimensional characters and events, but my trick is to rarely take from one single instance. This has helped me craft up a special uniqueness to the character or situation.

What is your favorite underappreciated novel?

Dragon’s Bait by Vivian Vande Velde. This book inspired me to write what would later become my first published book and series. There was so much about it I love, from the interesting take on maiden sacrifices and saving one’s self, to revenge, to relationships between humans and non-human characters. And every time I mention this book, very few have ever read it or any of her work.

How did you come up with the title of your book?

The title of each book in the series follows the oracle and divine vision theme, particularly around prophecies, as that drives Aviana to start her journey and keeps her going, among other things. And while Aviana’s gift is still relatively new in the prequels, I ran with this theme still, though tweaked it in ways to show not only were the prequels what they were, not part of the main story sequence but to also showcase that stage of her life as an Oracle.

Coming up with the title themes wasn’t easy though. I ran through so many different ideas that didn’t resonate with the story. I had to sit down and think about the story as a whole and part of the individual books and the themes I’d be exploring. One common theme was the prophecies because of Aviana’s gift, and suddenly the ideas came to me. There were many titles that weren’t great, but it didn’t take long to come up with many for the main series and then deviate a few for the planned prequels

Tell us about your main character.

Aviana is a half-elven woman born in a clan of dragon worshipers. Her clan doesn’t describe it so simply, but the common tongue doesn’t have a clear translation. Her non-elven heritage comes from her father, a blue dragon. This type of lineage would be a great honor to her clan, nearly something sacred, had past conflict not corrupted her people. Because of this, she is hated by most and is forced to live as an outcast.

To make matters worse for her, she comes from a sacred family line, one with a blessed gift given by the clan’s two gods, Akorith and Lusaria, the latter lost having long fallen from grace into darkness shortly before the clan began to crumble. Because of this, the clan sees her as a blight to her family, which she is now the sole surviving member. Unfortunately, Aviana struggles not to agree with them, even though Akorith speaks her and says otherwise.

The main series, she is an outwardly confident woman who knows what she wants and goes for it. Some of this confidence is a facade though. While she struggles to believe she’s someone worthwhile, jaded from the belief she could have lasting happiness like others, she lives on, trying to find a way to bring her clan to its former glory. If not for their sake, but her own. She longs for a day where she doesn’t have to worry if her life is in danger for merely breathing.

In the prequels, however, she is much younger and has yet to blossom into this seemingly confident person. She is struggling to find her foothold, and Akorith comes knocking with her first large task.

I have two kinds of villains in my stories. Ones that are physical and are so powerful it’s hard to not feel overwhelmed and helpless to stop them. This feeling is what makes them scary. When you take away the power of those who are good and tip the scale towards those who are evil, the overwhelming sense of hopelessness makes them seems even stronger.

My other villains are not physical, but emotional—our fears. Fear comes in many forms. They can be logical and illogical. They’re so strong and terrifying. It’s hard to understand how you could possibly combat them. This is what makes it strong, even if it’s not. It overwhelms us to the point we make ourselves weaker in the process.

I enjoy using both of these villains, sometimes together, or sometimes by themselves. Each has their own type of impact.

Who designed your book cover?

I hire out a talented illustrator from Indonesia by the name of Jackson to do my cover art. I’ve been working with him since my second published book (later going back to have him work on a redesigned cover for the first published book when it was updated and republished). He’s super great to work with and an awesome guy on top of that.

How did you find your editor?

I have been working with my editor for 90% of my authoring career. I started off with someone else, but she left the industry suddenly, leaving me frantically searching for someone new while I was in the middle of publishing a series with a continual storyline.

I did all kinds of searching and reaching out to prospective editors and obtaining samples. None of it panned out well, and it became disheartening. Then a writing friend reached out to me letting me know someone she knew was looking for clients. She was new to editing as a career but had various editing jobs under her belt. So I got in contact with her. We hit it off in the most spectacular way, and I was blown away with her skill. She picked up where my last editor left off and the rest has been history.

What are you currently working on?

I’m always working on multiple books at a time. It keeps my brain occupied and prevents it from getting bored. As it stands, I’m focusing on eight titles to keep me busy. One high fantasy short for an anthology, two novels for the Oracle’s Path series, two novels in my Looking For Group gamer romance (duet ménage for these two titles), and the final book for my urban fantasy Experimental Heart series.

What kind of books do you read in your free time?

I read fantasy, LitRPG/GameLIT, dystopian, romance–all kinds of books. No matter what I read, I have a preference of romance as a subplot in the very least, as I feel it adds more to the story.

Do you have any advice for aspiring writers?

Your first draft is garbage…

So are mine. So are prolific writers like George R.R. Martin, Patrick Rothfuss, and J.K Rowling. That’s how a first draft is supposed to be. It’s you spitting out all your ideas in some sort of strange order that may or may not make for a cohesive story. It means you’re going to over and under explain, add or omit the right and wrong scenes. You have the redrafting phase to worry about making it “perfect.” Focus on getting the bare bones of the story down, so you know where it’s going before you worry about how pretty it sounds.

It gets easier as you write. Sorta.

Also, it’s never going to be perfect. You could spend your whole life trying to make one book “perfect” and never succeed. And that’s okay too.

A dragon’s trust. A clan divided. A god’s command.

Half-elf Oracle Aviana must complete an impossible task—unify her broken clan. Fractured during conflicts centuries before her time, they’ve lost their ways, causing Aviana’s existence, once seen as sacred, to be a living hell. At twenty years of age, and now an adult according to their customs, all she wants now is for them to see her as worth more than her blood. And the dragon god, Akorith, has just the plan.

A connection since birth to the mighty entity, his whispers have followed her dreams, speaking of an era long forgotten—one he needs her to revive, or a great darkness will consume all. To do so, she’ll have to complete a task her mother started before her disappearance: gain the trust of two dragons who now see her as the enemy.

Only problem? She’s not permitted to leave the clan’s territory. Any movement outside of town and she’s monitored. And such a task, even from a god, would be seen as treasonous. To make her task even harder, her mixed-blood nature begins altering her physical appearance, ensuring she’ll gain more enemies than allies if she doesn’t learn to conceal or control it.

And when she finally meets these two dragons, ones her mother had come to care for greatly, Aviana must make the most difficult choice of her life…

Readers who enjoy epic adventures, feisty dragons, and a strong heroine who defies all odds, won’t be able to put down Prophecy Chosen, leaving you reading into the night.

Buy Prophecy Chosen and discover for yourself if one determined oracle can make her own fate, or whether she’ll be lost in the threads of prophecy…

—–
Note: Like all of Shannon Pemrick’s work, the Oracle’s Path series is NOT a clean read or suited for younger audiences. If you enjoy your books free of strong language, violence, substance use, love scenes, and other adult situations, this series isn’t for you.

Prophecy Chosen is just 1 of 25 stories awaiting you inside Rogue Skies!