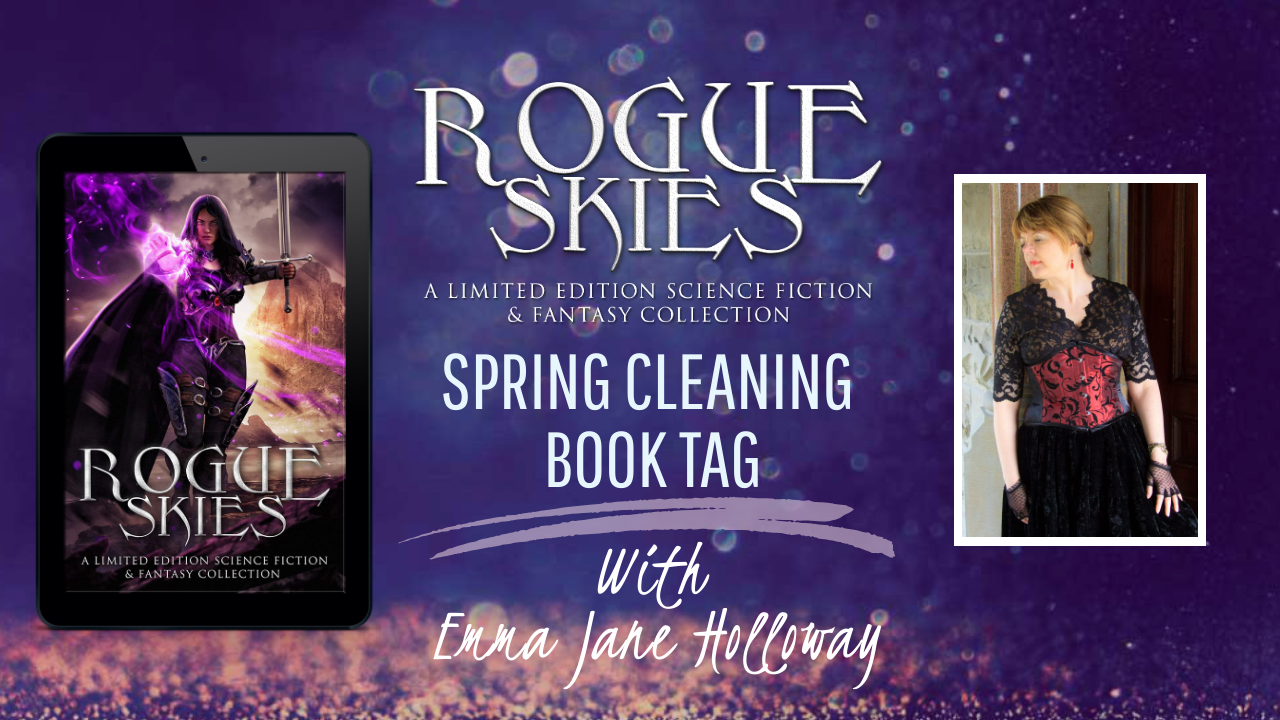 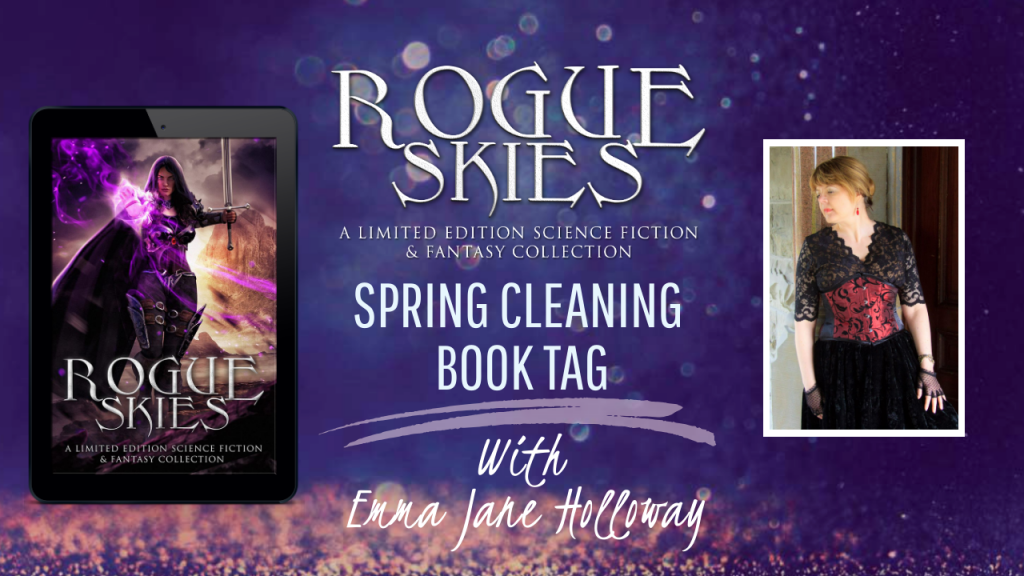 Every Tuesday the authors of Rogue Skies will be bringing you some fun book/author tags! So what are tag posts? A tag post is a series of questions that we will answer and then challenge our readers or other blogger and authors to do too! It’s just a fun way to get to know a little bit more about each other!

This week we’re doing The Spring Cleaning Book Tag created by Jen, aka BookSyrup. You can find her Youtube channel and original video here!

Emma Jane Holloway tidies up and shares her book recs with us below!

The struggle of getting started: A book/book series that you have struggled to begin because of its size.

When I first read this, I thought the question was about starting a book series as an author. In that case, the answer is definitely yes—when I’m writing fantasy, I put a lot of layers into a series, and that takes planning—plus a great many sticky notes, flow charts, and snacks. Plotting gives me the munchies.

As a reader, it depends on my mood. Sometimes I deliberately seek out a great big series because I want a world to get lost in. But the doorstop (at 782 pages) that gave me pause for a very long time was Susanna Clarke’s Jonathan Strange and Mr. Norrell. It’s one of those books I really wanted to embrace and yet—no.  I finally made friends with it via audiobook and really enjoyed the experience, but the hardcover was just too much. 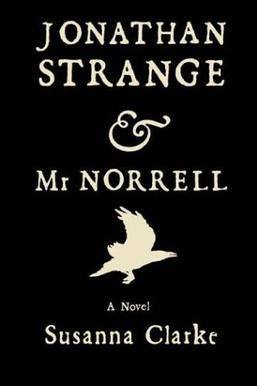 Cleaning out the closet: A book and/or book series you want to unhaul.

I recently took a load to the local charity book sale. There wasn’t a specific series, but there were a number of dukes, lairds, and other lads who had difficulty retaining their shirts during the cover shoot. Not that I don’t enjoy a good romance, but I keep very few once I’ve had my way with them — poor shirtless boys.

Opening windows and letting fresh air in: A book that was refreshing.

Strange Practice by Vivian Shaw, which is the first in her Greta Helsing trilogy. It’s funny, smart, and very well-written. I adore the way the author balances between tongue-in-cheek humor, stray Gothic literary references, and some pretty dark material. It’s a well-crafted A+ in a genre that doesn’t always live up to expectation. 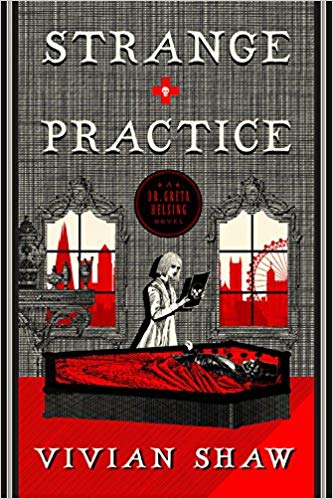 Washing out sheet stains: A book you wish you could rewrite a certain scene in.

If it were up to me, all the dire wolves and dragons would survive GoT. I can take a lot of (fictional) misfortune where humans are involved, but not when it comes to animals.

Throwing out unnecessary knick-knacks: A book in a series that you didn’t feel was necessary.

That’s a tough one because it’s extremely subjective. Writing the book might have made perfect sense to the author. That being said, the one that stands out in my mind—and this was a while ago—was Micah by Laurell K. Hamilton. I enjoyed the early books in the Anita Blake series, but I never connected with that character or his book. That might have just been me. 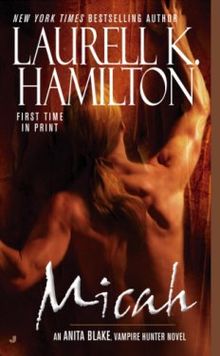 Polishing the doorknobs: A book that had a clean finish.

Neil Gaiman’s The Ocean at the End of the Lane. It’s a beautifully structured story, and the end is exactly what it should be. 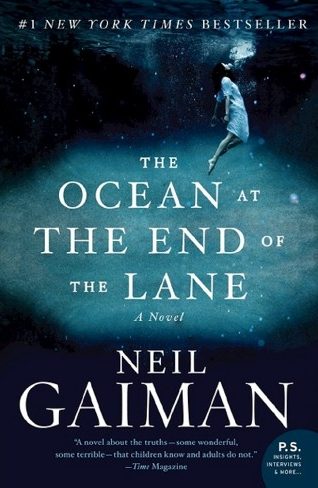 Reaching to dust the fan: A book that tried too hard to relay a certain message.

Mini Habits by Stephen Guise. It’s a self-help book, so the way it’s told is, of course, different from fiction, but I felt I had the main point about halfway in, and the rest didn’t add anything to the message. Despite that, I think it’s a worthwhile read. 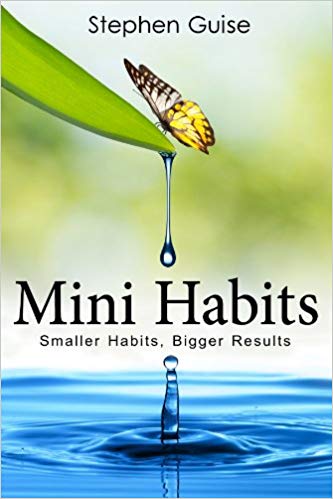 Lord of the Rings. I’ve read it several times, but there is always the sense of having gone on a huge journey when it’s done!

Looking forward to next spring: Tag 4 people you want to do this tag.

I won’t stop at 4—I challenge all the Rogues to complete this book tag!

Ever since childhood, Emma Jane Holloway refused to accept that history was nothing but facts prisoned behind the closed door of time. Why waste a perfectly good playground coloring within the timelines? Accordingly, her novels are filled with whimsical impossibilities and the occasional eye-blinking impertinence–but always in the service of grand adventure.
Struggling between the practical and the artistic–a family tradition, along with ghosts and a belief in the curative powers of shortbread–Emma Jane has a degree in literature and job in finance. She lives in the Pacific Northwest in a house crammed with books, musical instruments, and half-finished sewing projects. In the meantime, she’s published articles, essays, short stories, and enough novels to build a fort for her stuffed hedgehog.