Qualities Every Hero AND Villain Should Have

Qualities Every Hero AND Villain Should Have 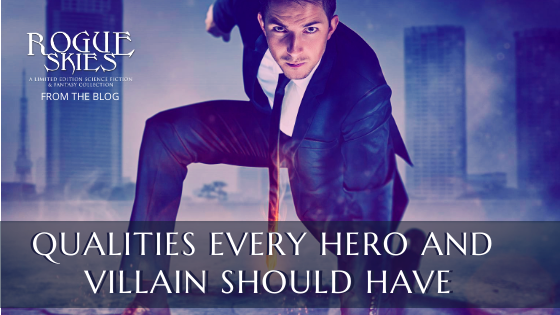 Have you ever read a story where the hero seemed too bland or the villain too extreme? What about a stereotype that is so inflexible it has nothing to distinguish it from a thousand others out there?

There are multitudes of crafting skills for writers when it comes to creating characters, and it’s not really possible to gel them down into a few succinct points. But taking a step back and looking for three basic things could facilitate the process.

There are three basic qualities readers look for instinctively in main characters.

The hero needs a character strength that sets them above average. Where would Harry Potter be without his loyalty to his friends? Or the young Luke Skywalker without his optimism? Even a very dull, average hero can be admirable, say something as simple as knowing when to keep their mouth shut.

Character strengths are connected to motives. Readers want to recognize the character’s strength and see them acting according to it. When a well-defined character acts ‘out-of-character,’ it’s frustrating to readers unless there’s a crisis or outside pressure that induced it. Luke’s optimism was crushed by Kylo Ren’s betrayal to the dark side of the force and morphed into pessimism about himself. Yet it still reflects a parallel character quality: the tendency to stress the importance of his own actions.

Villains also need character strength. This is why Saruman is a more tangible villain than Sauron, who is little more than a murky embodiment of wickedness. Saruman is both incredibly clever and self-confident making him a formidable enemy.

The second thing needed is a character flaw. You may think this goes without saying—but it doesn’t. Your heroes can’t be perfect, and your villains can’t be all powerful. Stories are weaker when the characters have no depth; and is it fair to make the plot carry the entire adventure?

Character flaws deepen the person and add interest, like shadows in paintings.

Han Solo’s cynicism and self-interest were weaknesses, but they ended up strengthening the impact of his heroism. Gandalf’s respect and admiration for Saruman became a weakness when it blinded him to his deceit.

It is possible to ignore weaknesses and make it work. Wonder Woman doesn’t seem to have any character weaknesses, and it’s one of the things that makes her larger than life. If she weren’t nearly invulnerable though, her boldness would become recklessness. In that sense, something in the reader recognizes and adjusts to the flaw and the way it was conquered.

When writing, you should ask yourself, “What are my hero’s/villain’s character flaws? Are they caricatures or believable?” The answer should depend on what your goal is. Humor and light-hearted adventure thrive on caricature.

Identifying With the Character

The third quality readers are looking for is something they can identify with. Katniss from the Hunger Games is unhappy and suffering injustice. Readers can identify with her desire to overcome hardship and protect others. They may also identify with the brutal selfishness of the other players in the game.

A villain may be so foreign and despicable that the reader can’t relate to them at all (we hope) but the moment they start to justify themselves or be lazy or petulant, they become something we can instinctively identify with.

We may not understand a villain’s thoughts or choices, but the moment we see a touch of ordinariness, a sliver of humanity, that character becomes more real, like Gollum softening under Frodo’s authority in a brief flicker of trust.

It’s funny how arrogance, which is basically a character flaw, is often paired with more attractive traits in both heroes and villains, and it’s one of those things memorable characters almost always have. It seems to be something we can all identify with.

Start with some characters from a favorite book or movie and list a few of their character qualities, labeling them as strengths and weaknesses. Put a star by the ones that made them seem more compelling to you. Then ask yourself if there is anything you can identify with, either directly, or indirectly (that you have seen in others). Practice this until it gets easy.

Now, turn to your story. How do your own heroes and villains stack up?

Need some inspiration? Rogue Skies is filled with a multitude of heroes and villains, characters and flaws. There’s sure to be something in there to set your creativity alight! Get all 25 stories today for just .99!