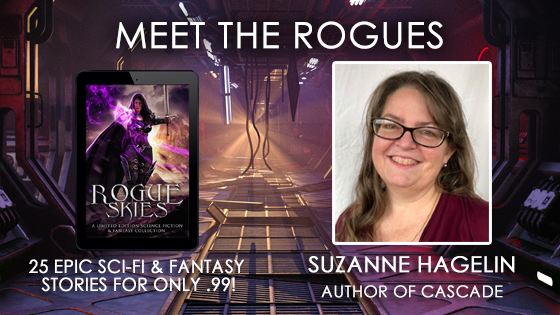 Tell us a little about yourself.

I live in the Pacific Northwest, where I run an indie publishing company with a small group of authors. My books are mostly hard science fiction focusing on the subgenre of AI with hints of genetic engineering, conspiracy, and world domination. I have published two books in a trilogy, and the last one is due out this fall. Being somewhat adventurous, I find storytelling to be a great outlet, where I can explore worlds and scenarios I’d never get to see any other way. Characters are important too, driving the stories and adding twists I didn’t see coming until I got there. I like heroes who overcome regardless of their limitations and often end up with a strong female lead.

I knew that I wanted to be a writer when I was fourteen, and it’s always been a part of my life. In the past few years, I started an indie press and began writing and publishing books.

Yes and no. Everyone I’ve ever known influences my characters, but that includes fictional people. They end up being unique individuals. As far as scenes go, my background has made it easier to paint scenes with cultural differences and originality. I’m pretty good at inventing language, too, though my current books don’t have any of that.

What is your favorite/most frustrating part of the writing or publishing process?

My favorite part is working out the problems in plot flow. It’s often the hardest part of the process, but it’s very rewarding and worth the effort.
The most frustrating part is marketing and promotion. It’s like learning to kayak through white water rapids, and it has subjected me to many dunkings and tossings. Somehow, I make progress and get my head upright again, spitting out water and getting better each time.

What inspired you to write your last book?

My latest book is Nebulus, a sequel to Body Suit that continues the riches to rags story of a woman who escaped from Mars with the help of a hi-tech suit. The adventure gets complicated as villains, AI, and friends clash, and widespread chaos ensues.
Even though I was full of adventurous ideas for my various heroes and villains, I was also inspired by the crisis people face when they’ve lost their identity and explored how it could play out in the realm of artificial intelligence. The title, named after the Roman nymph made of clouds, hints at that.

How did you come up with the title for your new book?

Cascade, the title for my new utopian/dystopian book, is what they call the invasion forces being fought by the main character. Thousands of floats, wispy, jellyfish-like things drop from the skies over the human towns, and the Sentinels are tasked to destroy them before they can hit the surface.

Tell us about your main character.

Kierkad is humanoid with no memory of his past. He gave up everything to follow the Noble Call and become a Sentinel. Deep indoctrination and ongoing conditioning keep him and his fellow Sentinels in cohesion within the Order of the Sentinels. But underneath, he has periodic bouts of emotion and questioning—deviations that are reset when detected by the controlling forces. One day, he learns to hide from the corrections and begins to resist the suppression.

How did you pick your character names?

All the Sentinels share a suffix depending on their rank. Most of them end with kad. The first part of the names, I chose almost randomly. I often throw in a name, so I won’t interrupt the flow of writing, and come back later to work on it. In this story, I liked the names and stuck with them.

It’s invisible and unknown. Its motivations are obscure and its goals murky. And it seems to have power over everything.

What makes your book different from others in its genre?

The villain. There are many utopian/dystopian novels that puzzle out the flaws under the surface peace. In this book, the underlying reality is unique.

Do you have a favorite scene in the last book you wrote? Tell us about it.

The last book I finished was Nebulus, the sequel to Body Suit. I absolutely love one of the last scenes where the villain and the heroes are caught in their final conflict and help comes from an unexpected source. It’s crazy and exciting, and I can hardly believe I was able to capture it the way I wanted.

What is the best resource for authors?

Connecting with other authors is the best way to find good resources that work for you. There isn’t just one way. It takes time to discover the groups, online tools, and resources that fit you best.

What are you currently working on?

I’m writing a two-book set about a utopian/dystopian world that tells the story from two opposite sides of the conflict. Cascade is told from the point of view of the forces fighting a puzzling invasion and Eclipse is told by the invasion. There’s a chance I may add a third book revealing more about the villains.

Do you have a day job, or are you a full-time writer? What is your day job? Has it helped your writing?

My time is split between writing and my publishing company.

What kind of books do you read in your free time?

Mostly hard sci-fi, which I’m exploring, looking for good indie authors I want to read and promote. But I also read a fair amount of fantasy and a smattering of other kinds of books including biographies, classics, and the occasional how-to book. Plus, I do lots of research on the things I’m writing about.

Something is wiping out the Sentinels.

Kierkad, like his brother Sentinels, is ready to die protecting humanity—he gave up everything for the privilege. The wipe left him without species, home planet, or identity, leaving only a hollow blank inside. He lives among the people he serves but is excluded from their paradise, sustained by the zeal of a noble heart.

One day, the Cascade begins to fall from the skies like dead leaves, a virus guided by sentient thought with dread purpose.

As brother Sentinels disappear in increasing numbers, Kierkad finds his world fracturing. The fight to survive the rending within and the decimation of the ranks of the brothers brings a stark realization.

The Noble Call has become a trap.

Cascade is just 1 of 25 stories awaiting you inside Rogue Skies!