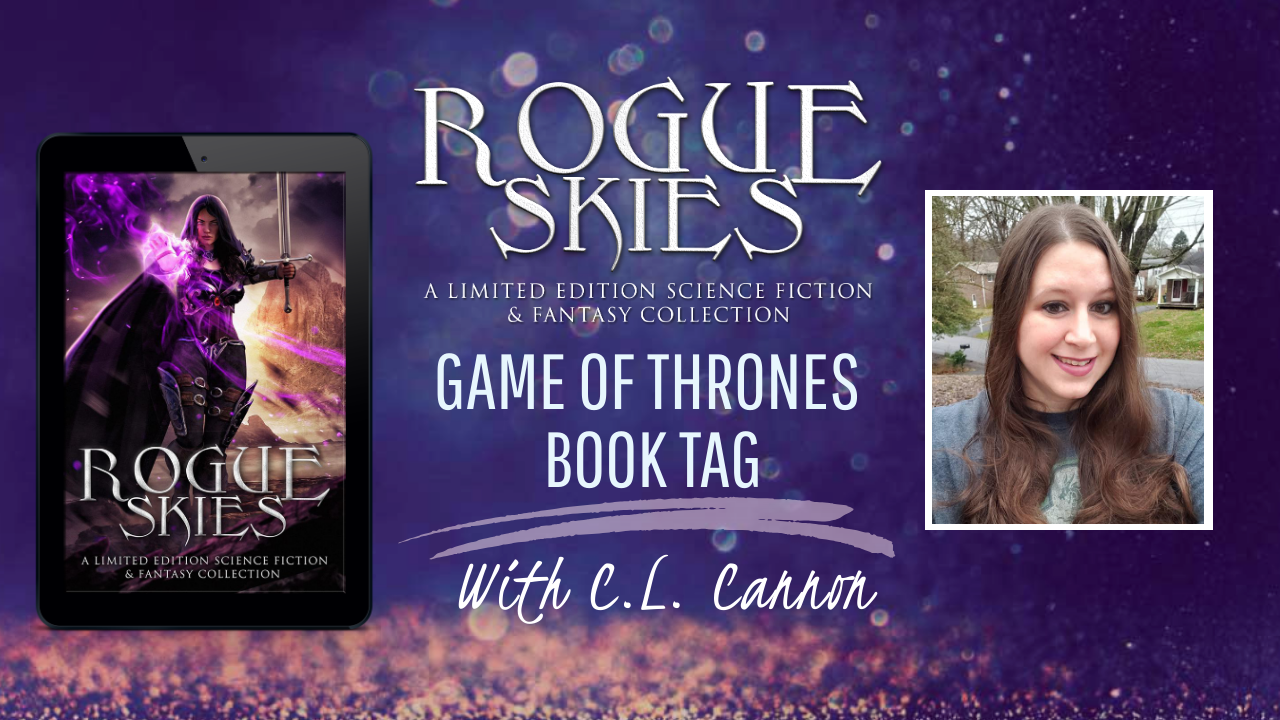 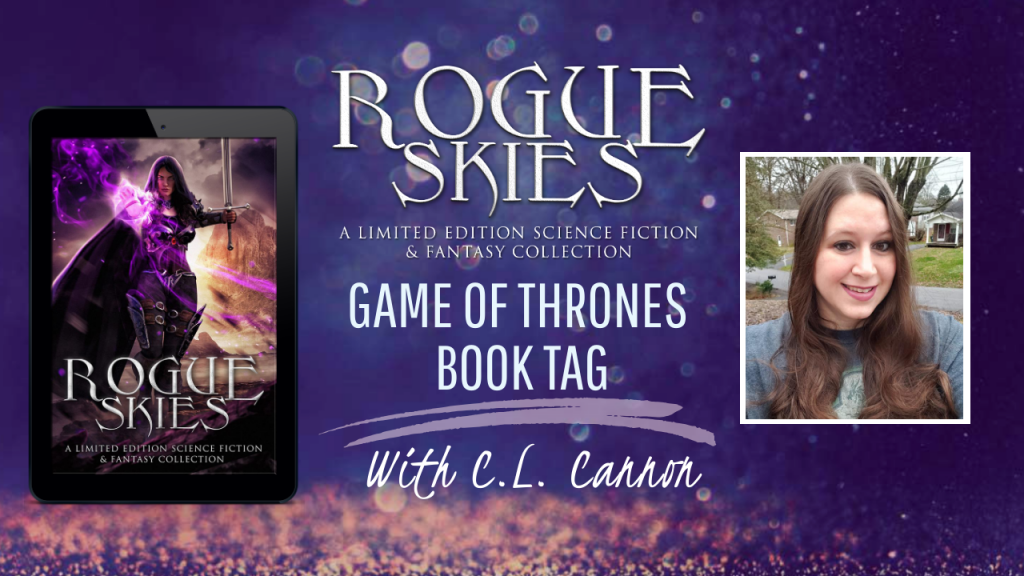 Every Tuesday the authors of Rogue Skies will be bringing you some fun book/author tags! So what are tag posts? A tag post is a series of questions that we will answer and then challenge our readers or other blogger and authors to do too! It’s just a fun way to get to know a little bit more about each other!

I thought it would be really fun to do this in video format as well, so I’ll leave the video here, and you can also see the answers below!

1. Arya – A character that’s all about revenge.

Nova from the Renegades series by Marissa Meyer. Her main goal is to get revenge for her family and most of all, her uncle, and so she infiltrates the heroes ranks for the sole purpose of revenge.

Sword of Stone by Melissa E. Beckwith. This is the third book in this series and deals with Rhiannon Kossi becoming the Empress of Ventra, and in taking this role, she is responsible for a lot of political decisions for her people.

3. Joffrey – A villain you just love to hate.

Peter Pan. I love Peter Pan, but I also love dark retellings where Peter is not quite so innocent. Lost Boy by Christina Henry is one of the most recent of these I have read, and I just loved to hate Peter in this story. Every time he made an irresponsible decision or was indifferent to one of the boy’s problems it made me hate him that much harder!

Gill Lanval has one of the best coming of age stories in my opinion. He starts out very arrogant and without a care at the beginning of Mirrors by Rebekah Dodson, but by the last book in the series, he has grown so much. He feels a great sense of responsibility, and he takes more care with his actions. I think everyone should pick up this series because Gill is one of my favorite literary characters of all time!

I’ll get a lot of flack for this, but Harry and Hermione from the Harry Potter series are my NOTP. I cannot stand this couple. I think a lot of their ship was sailed because of the movies, which gave a lot of Ron lines to Hermione and which seemed to focus more romantically on Harry and Hermione. I love Harry and Hermione’s friendship, but it was pretty obvious to me by the second book that Rowling was foreshadowing Ron and Hermione. I’m also a huge Ron and Hermione fan! I actually created the ship name Romione to replace MuggleNet’s HeRon and built my website, LoveUnchained.com as a haven for Romione shippers. I have been very active within the fandom over the years, and LoveUnchained was one of the most popular Harry Potter websites back in its heyday! I also worked for Rupert Grint.net on their magazine for a while and ran a Ron and Hermione podcast called R/Eal Love podcast for a while. I think it’s safe to say that I was pretty invested!

Haymitch Abernathy from The Hunger Games series! Who could be more badass than the victor of the 2nd Quarter Quell? Haymitch is one of my favorite characters from the Hunger Games series. I loved how complex and broken he was because of his past experiences and how he overcame his depression and fears to once again become a champion of the people by helping Katniss and joining the resistance.

I had to think long and hard about this one, and I don’t know why! Of course, the answer is Smaug from The Hobbit by J.R. R. Tolkien.

8. Sansa – A character you grew to love.

Gifford Dudley from My Lady Jane. This is a book I didn’t think I would enjoy, and a character I wasn’t very keen on at the beginning. You think he’s just going to be a throw-away character, a plot device in the form of a forced marriage to our protagonist, Jane, but he becomes so much more. He is hilarious, caring, and the lengths that he goes to protect and support Jane are so endearing that he becomes affixed to your own heart!

I have read a healthy dose of Fantasy books and had plenty of magic systems to choose from, but I think my favorite, probably because I am such a bookwork, is the magic system from Inkheart by Cornelia Funke! What could be more magical than reading a character to life?

10. Tyrion – A character whose weapon is their mind.

Kaz Brekkerfrom Leigh Bardugo’s Six of Crows duology, hands down! Kaz has plenty of physical prowess at his disposal, but his mind, his meticulous planning, and quick wit are what make him such a dangerous and feared character. Kaz has to be one of my favorite anti-heroes of all time!

All my writing is influenced by the things I’ve shared with you here today.

I hope you’ll enjoy my story, Time After Time, which is just 1 of 25 stories awaiting you inside Rogue Skies!