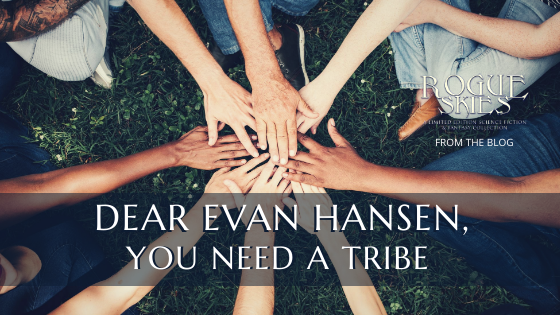 In this age of hyperconnectivity, some people feel more alone than ever. I had an interesting pair of experiences a couple of weeks ago that reminded me how important it is to connect. And how hard it can be. Don’t worry, this isn’t one of those, “the internet is bad, get off my lawn” essays.

Situation one: It’s Sunday morning, the last day of JordanCon, a small science fiction/fantasy convention. I’m an author guest, and I’m on a panel called, “Mental Illness on and off the Page.” Not surprising since I’m a psychologist in my day job. The openness, warmth, and honesty of both the panelists and the audience members inspire me and help me feel less alone.

Situation two: That same Sunday, my husband and I attend the evening performance of Dear Evan Hansen. I’m thinking of my teenage patients and how the competitive high school environment is so different from the welcoming camaraderie of a fantasy convention. 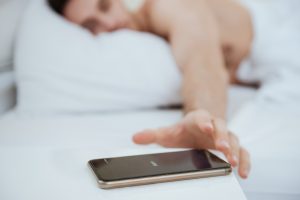 In case you’re not familiar with the musical, here’s a brief, no spoilers summary of how it begins and the premise… A depressed and anxious teenage boy is given an assignment from his therapist to write encouraging letters to himself. The letter he’s writing at the beginning of the play isn’t encouraging, but he decides to bring it to his therapist anyway. A disturbed kid named Connor steals it off the school computer lab printer. Connor later kills himself. The letter, which contains language like, “If I disappeared, would anyone even notice?” is misconstrued as a suicide note addressed to Evan. Rather than coming clean, Evan lets the deception continue with interesting consequences.

The truth is, Evan doesn’t have anyone. Evan’s mom is in school and works all the time. He has two close acquaintances. Alana focuses on building her college application rather than truly connecting with people. “Family friend, not friend friend” Jared pushes Evan away while helping him to perpetuate the deception that he and Connor were close.

A few years ago, fantasy author Gail Martin started the Hold on to the Light movement to bring the conversation about mental illness to the fore. In her initial essay on the blog, Gail talks about how finding her community through science fiction, and fantasy conventions saved her life when she was a teenager. Several authors – myself included – have written essays sharing about our own experience as part of Hold on to the Light. I look forward to going to cons because I feel like I’m with my tribe – speculative fiction authors and readers. Not only do we have the same interests, but we’re also very supportive of each other, both with regard to writing and life struggles. It feels like we allow each other to see who we are, and we’re not only accepted but welcomed.

From my table in the Author’s Alley and elsewhere, I saw this welcoming and acceptance among other convention members. It was the sort of thing that Evan doesn’t experience, at least at first. Being on that panel and talking about my own struggles reminded me how supportive this community can be. I hurt for Evan. I wished I could help him find his tribe. It doesn’t even have to be face-to-face. One of my clients was telling me about a unique hobby, which connects them with a community around the world. Like my author friends and I, they get face-to-face time at conventions.

I’m so glad conventions are bringing the discussion of psychological issues into the open, but there’s always more to be done. Think of what of a difference we could make if we looked at kids like Evan and Connor and told them, “I see you, I care about you, and you are important.” Even better, think of what would happen if we welcomed them into our tribes.

So, dear science fiction and fantasy readers, I thank you for including me in your tribe. There’s nowhere I’d rather be. <3

The Rogue Skies authors didn’t start out as a tribe, we were just a bunch of authors who wanted to write Fantasy and Sci-fi, but over these past few months we’ve certainly formed a tight circle of support around each other! We hope that’s reflected within our stories and the way we intereact with fans.

We hope you’ll pick up Rogue Skies for just .99 and discover the 25 Fantasy and Sci-fi stories within!