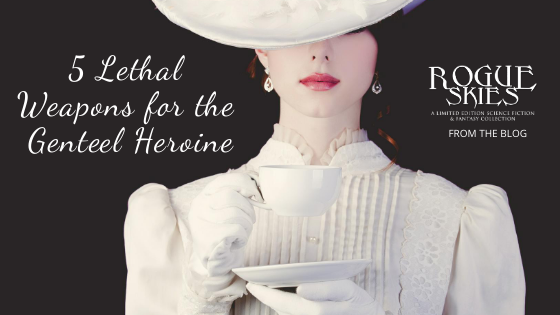 There are so many ways a lady could be deadly without wrinkling her gown. Forget the garter daggers and muff pistols and sword canes in the parasol—those are all terribly stylish but just scratch the surface of potential mayhem. Here are some juicy examples, torn from the pages of yesteryear’s headlines:

The New York Times of March 1, 1898, reports that Barotholomew Brandt Brandner, a Parisian visiting Chicago, entered a saloon on State Street only to be murdered by an unknown

assailant. Autopsy results showed a concussion, probably from a blow with a liquor bottle. But there was also a puncture that entered the left eye and extended far into the interior of the skull. This was assumed to be caused by a lady’s hat pin. Brandner survived for a week but eventually died from the injury.

Women’s hat pins, while pretty, were sharp steel and usually six to twelve inches long, depending on the style of the hat. Women were well aware of the pin’s potential for self-defense.

2. A Tried and True Method

A true Black Widow, Mary Ann Cotton (née Robson) was born in 1832 in a mining town in the northeast of England. Life in the laboring classes was hard, but enterprising Mary Ann discovered the modern miracle of life insurance. During the course of her forty years, Mary Ann had four husbands (two at once), several lovers, thirteen children, and lots of insurance claims. She was survived by one husband and two children. The estimated number of her victims was around twenty. She was hanged in 1873.

In the age of cholera, gastric fevers, and no refrigeration, stomach complaints were common. So were rodents, and arsenic was a common component of rat poison. Although the sale of arsenic was somewhat regulated, it was still available at the local chemist. Mary Ann brewed in tea, serving unwanted relations until a doctor noticed the body count. Too bad for her, tests for arsenic poisoning were available by the time her final victim was exhumed during the investigation.

Poison has a reputation—deserved or not—as a woman’s weapon. It’s true that the nineteenth century saw a number of cases with wives wishing to be merry widows. However, the amount of hysteria generated by the Victorian press regarding “secret poisoners” makes it sound as if every female forced into a corset and bustle was out for revenge. Then again…

Back in the day, medical students had limited access to corpses for dissection. The law of supply and demand gave rise to “resurrectionists,” who dug up the newly dead and sold them to

surgical schools. Needless to say, grave robbing is a tedious business, and someone was bound to find a way to skip the muddy bits. Why bother with all the midnight shoveling when you could murder someone in the comfort of your own home?

William Burke and William Hare did exactly that in Edinburgh, Scotland, in 1828, when they killed sixteen people and sold their remains. These deaths gave rise to the term “burking,” or asphyxiating the victims by sitting on their chests. It was a low-tech and largely undetectable means of murder.

However, as so often happens in history, the women are often left out of the story. Helen McDougal, Burke’s common-law wife, and Margaret Hare, wife of William Hare, shared in the crimes. Incredibly, of the four, only Burke was eventually convicted.

There’s always someone in the crowd who goes for the direct approach. When it comes to lethal historical ladies, no one cuts (or chops) to the chase like Lizzie Borden. It’s a good reminder that a lady’s weapon does need to be dainty, just effective.

Lizzie Andrew Borden was tried and acquitted for the August 1892 axe murders of her father and stepmother in Fall River, Massachusetts. Experts and hobbyists alike still debate her innocence and whether her gender impacted the verdict.

For fun, check out Cherie Priest’s Maplecroft for a fantasy interpretation of the case.

Corsets or “stays” come in different configurations, depending on the fashion of the day. At the center-front is the busk, a slender piece of bone, wood, or other hard material that slides into a pocket of material sewn into the garment. The function of a busk is to keep the corset rigid in order to shape the figure of the wearer. Busks were often highly decorated and given as sweetheart gifts—given the intimate way they were worn, one can only imagine the delicious banter involved.

There is also the suggestion that a small dagger could be slipped into the front of a corset in place of the busk. Although a popular trope, I’ve never been able to find an actual historical precedent for this—probably for good reason. One problem is the hilt sticking out of one’s bodice. Another is the awkwardness involved in drawing a stabby thing that close to one’s face. I leave the option here for consideration, but my money is still on the hat pin for wardrobe weaponry.

Want to read about some more women who really know how to handle an odd weapon or two? Check out the heroines of Rogue Skies! You won’t be disappointed! Get 25 Fantasy and Sci-fi tales for just .99!