Our Watch Has Ended: C.L. Cannon Reviews the Game of Thrones Series Finale

Our Watch Has Ended: C.L. Cannon Reviews the Game of Thrones Series Finale 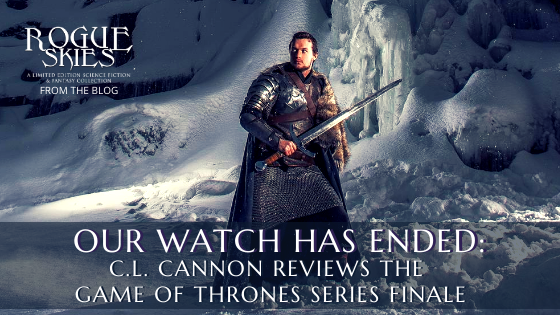 Well fantasy fans, our long watch is finally over, of Game of Thrones that is. Last Sunday, May 19th was the last ever episode of HBO’s Game of Thrones.

Like many of you, I had strong emotions about both the ending of this show and the season as a whole. I’m going to attempt to bring you a brief review of the last episode.

In order to do this, I’m going to have to warn you that the night is dark and full of spoilers!

Wow, what a ride! I’ve been a fan of Game of Thrones since the very first season and being a reader of George R.R. Martin’s A Song of Ice and Fire series, you can bet I was thrilled at the prospect of a tv show, and it did not disappoint!

Going into season 8, I was just as excited. The first 3 episodes were pretty satisfying. Then episode 4 and 5 happened and I was starting to worry that the show I’d loved so much over the years had flown off the rails. Luckily, episode 6, the finale, was much better!

My little heart broke as I saw Tyrion digging through the rubble to find his siblings. It was such an emotional and real moment and Peter Dinklage did a fantastic job.

I actually really loved Daenerys’s speech. It was well articulated and rousing. It also cemented in my mind that Dany had not gone Mad Queen as I had feared, but was instead just overly ambitious. She didn’t know the people of King’s Landing, therefore she could think with strategy instead of emotion. She was ready to rule with fear and had the power to do so. Though it was a terrible thing to do morally, it made a lot of sense from a military standpoint. I think she really believed in her cause and that ultimately, she would make a new world that was just.

Drogon destroying the iron throne. I think that was perfectly poetic. Dragons are supposed to be extremely intelligent. He realized that it was Dany’s quest for the throne that led to her demise.

Tyrion uttering the words “There’s nothing more powerful in the world than a good story.”  I was legit crying at this point because it was such a beautiful way to describe this show and definitely sounded more like a line written by Martin himself. It also echoed Lord of the Rings and Sam’s speech from The Two Towers, which is sure to punch me right in the feels!

“It’s like in the great stories, Mr. Frodo, the ones that really mattered. Full of darkness and danger they were, and sometimes you didn’t want to know the end, because how could the end be happy? How could the world go back to the way it was when so much bad had happened?

But in the end, it’s only a passing thing, this shadow. Even darkness must pass. A new day will come, and when the sun shines it will shine out the clearer. Those were the stories that stayed with you, that meant something, even if you were too small to understand why.

But I think, Mr. Frodo, I do understand. I know now. Folk in those stories had lots of chances of turning back. Only they didn’t, because they were holding on to something…That there’s some good in this world, Mr. Frodo. And it’s worth fighting for.”

Bran becoming the king. This is something I never ever expected, but it kind of works. I do wish they had given him a better moniker than Bran the Broken.

Sansa being a badass and putting Edmure Tully in his place while also securing the North as an independent kingdom. This is a character I hated in the first season who evolved perfectly into a powerful and respected woman.

Jon finally petting Ghost! I think we’ve all been holding our breath since episode 4 for that moment!

The new small council! The banter was hilarious and I definitely think the residents of King’s Landing (all like 5 of them that didn’t get barbequed) will be in good hands!

Sansa’s dress and the whole montage of the remaining Starks going on to conquer their futures. That was epic cinematography and costume design work!

Brienne writing up the deeds of Jamie Lannister. This was bittersweet for me. I really loved them together and I felt like Jamie running back to Cersi was a murdering of his character development, but if that had to happen, then I love this little nod to Brienne remembering the good he did.

Dany dying so quickly into the episode. I really felt she would die in this episode, but I kind of expected it to be a little later after more of the story had been fleshed out and Jon had more time to dwell on the decision. Also, not being much of a Dany/Jon fan, I wasn’t very enthused with the tearful goodbye as many others probably were. I did love the imagery of the scene as it mirrored Dany’s vision from the house of the undying in season 2.

At first I was a little upset about Jon ending up back at the wall. He had such a hero’s journey up until this episode, that it was shocking for him to not get a happily ever after, but let’s be honest, this is Game of Thrones, those endings are few and far between. As I thought about it more, it was actually pretty perfect. Jon never wanted the throne and he was most at home with his brothers on the wall. Plus it gave use the reunion with Ghost, so I’ll take it!

I’m a huge Arya/Gendry shipper and have been since the second book! And while I agree that Arya would never go be a lady in a castle, and was right to turn Gendry’s marriage proposal down, I would also like to think that Gendry would hop aboard that ship and travel west of Westeros with Arya. It didn’t happen, that we could see in the show, but I like to have it as my little headcanon that he did just that!

The logic of the council meeting. This felt all too convenient for me. Greyworm was so intent on justice being served and all that, then he lets Jon’s brother become king of the six kingdoms and his sister the queen of the North. Both let Jon off the hook with a relatively mild sentence.

As with Dany’s death, this episode felt sort of choppy. There were a lot of time skips that could have been more smoothly transitioned if the season had been longer than 6 episodes. This whole season suffered from this.

Come September, you may need to fill the void that Game of Thrones has left in all of our lives. So if you love books, other worlds, and glorious battle, be sure to pre-order Rogue Skies: A Limited Edition of Science Fiction and Fantasy Collection. For just $0.99, with 25 books in one set, it’s sure to immerse you for a nice long while.