Why we love… Fantasy

Why we love… Fantasy 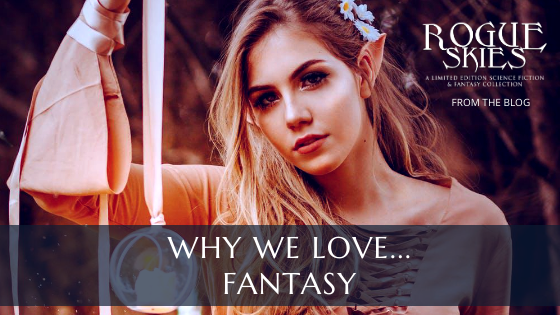 As a psychologist, I love the question of why I and others like fantasy. There’s definitely the aspect of wanting more magic in life, but I believe it goes deeper. Many of my clients’ problems boil down to how they handle real or perceived power imbalances. Fantasy is a great way to explore power and how it works – and could work – in our world.

So, with that in mind, here are some reasons I write and read fantasy:

We want to be magical, that is, powerful

I originally proposed this idea to my husband as, “men have always wanted to be gods.”

“Yes,” he replied, “and to sleep with goddesses.”

In our culture, and perhaps even in our psyche, we would love to be more than human. Imagine how much fun it would be to have an edge getting around everyday annoyances. Traffic? No problem. Just go to the office telepathically. Mother-in-law won’t be nice? That’s fine, just string her up with webs – temporarily, of course. She probably won’t mess with you again. We all have life situations over which we feel powerless, and it’s fun to connect with influential characters.

It’s fascinating to watch how humans interact with beings more powerful than they are. Think about your average VIP if there is such a thing. Here in Atlanta, we have sports stars and entertainment industry people. VUP’s, or very unimportant people, don’t act normally around them, and the stars often get special treatment.

Now extrapolate that to someone who is magical, perhaps a well-known wizard. The treatment they’ll get will be even better, and it’s interesting to watch – and write – how humans and other paranormal creatures interact with them. There’s often an element of fear, and what that magical VIP does with it reveals a lot about him or her. If you read carefully, you’ll notice that good guys often try to reduce the intimidation factor while bad guys cultivate it. Some characters go against that expectation for plot reasons or to keep others away from them emotionally, and they’re fun to write.

We see ourselves as the underdog, and we like to vicariously live through characters triumphing against the odds

A lot of people enjoy watching sports. If they’re viewing a game between teams they don’t connect with, they’ll often root for the underdog. Everyone faces situations where there’s an unfair balance of power, and a lot of fantasy heroes start out at a disadvantage. At the beginning of my steampunk* novel Eros Element, my heroine Iris finds herself struggling against the disadvantages typical of a woman in Victorian times. She faces the threat of marriage to an odious minor nobleman in order to save her household, but she really wants to be an archaeologist. As the book progresses, she discovers the nobleman is only one of her problems. To misquote J. R. R. Tolkien, one may not simply hide from a powerful adversary, but hey, at least I know Iris has a fighting chance, and I can experience her victory with her.

Speaking of vicarious experience… Many of our cultural myths and fairy tales teach the lesson that grasping too much at divine power yields bad results for the ambitious human. Think about the Greek myth of Prometheus, who was punished for stealing fire from Mount Olympus and bringing it to mortals. Also, as with science, a magical system has to make sense, and actions have reactions and consequences for the user and the recipient. Reading fantasy gives us the chance to say to a character, “Hey, you try it first.” This can lead to humorous and/or tense situations for them, and, by extension, us. As for the backlash, that’s what keeps us reading. We can put the book away if we need to but are more likely to see how they get out of their difficult situations and then experience the triumph with them without any of the lasting scars.

We know who the monsters are.

In our modern world, many of our enemies are faceless. Identity thieves and hackers. Super-powerful viruses. Natural disasters. In fantasy, the heroes and heroines know who the bad guys are…usually. I do enjoy reading and writing a good twist, but it’s comforting to know that the bad guys have a finite and identifiable quality to them.

Fantasy and urban fantasy help us to deal with the problem of power and its imbalances and consequences on literal and metaphorical levels while bringing some magic into our imaginary lives. Now go imagine how much fun it would be to have a magic wand while dealing with summer beach traffic and crowds.

* Okay, steampunk is technically a subgenre of science fiction, but my steampunk novels have magical and fantastic elements, so it counts.

This article was adapted from a post originally published on Fresh Fiction in December 2013. You can read it here.

If you have a hankering for some fresh fantasy reads, then check out Rogue Skies,

a collection of 25 Fantasy and Sci-fi stories now or preorder for just .99!