5 Life Lessons We Learned From Firefly

5 Life Lessons We Learned From Firefly 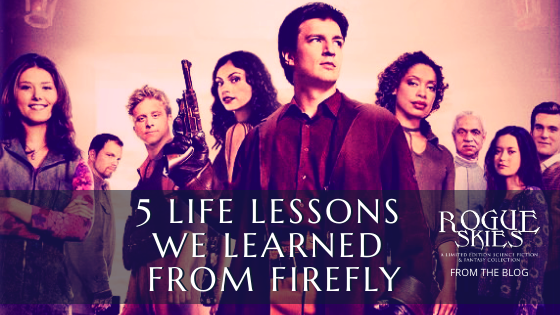 Very few shows which ran for just 1 season can claim they’ve had such an impact on fans as Firefly! The sci-fi/western mash-up is still drawing in new fans 17 years after its debut. And old fans aren’t going anywhere either! Joss Whedon’s 2002 brainchild has amassed a cult following and has gone down in history as the most epic show canceled too soon! The buzz for the show was so enormous, following its 2003 cancellation, that a movie was made to help bring the world to even more viewers and give a little closure to the crew of our beloved Serenity, which also happened to be the name of said movie! Even though there were only 12 episodes and one 2-hour long movie, we still gleaned plenty of life lessons from Mal and his crew, so here’s 5(ish) life lessons we learned from Firefly!

1. When calculatin’ 10% of nothin’, remember to always carry the nothin’.

Ah, math I can actually do in my head for once!

2. Betrayal is sudden but inevitable!

Carnivores, can’t trust them, can’t eat ’em… because they eat you first, and also, you’re a herbivore.

3. If you’re going to swear to end someone…do it in a pretty floral bonnet! It’s all the rage 😉

One must always be properly attired before taking lives.

4. Someone ever tries to kill you; you try to kill ’em right back!

5. The best maintenance routine for a Firefly class ship is…love!

Not gonna lie, this line always makes me cry.

Though, if you’re not a child molester or a person who talks in the theatre, you should be good XD

If’in you aim to have a good time, we got this shiny collection of Fantasy an’ Sci-fi tales called Rogue Skies. So sit down for a peck an’ enjoy ’em all for just .99 credits!  We think it’s the best scratch this side of the ‘verse!