What Does Your Writing Style Say About You?

What Does Your Writing Style Say About You? 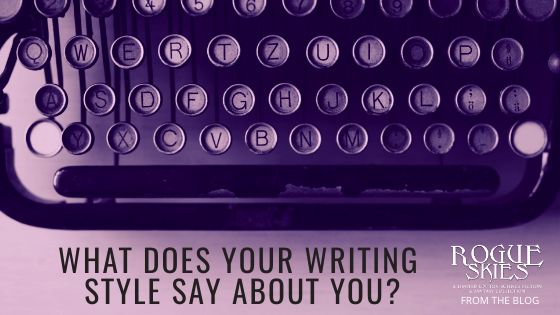 Wherever you’re from, whatever your background is, you have an accent. This is no surprise, though you may be used to thinking people from other places are the ones with the accents. The point is, when you speak, the way you pronounce words gives others a clue of where you’re from. The vocabulary and expressions you use will add to the impression.

In fact, there are a number of factors at play in what you sound like when you open your mouth. Cultural influences, age group, hobbies, family background, personal quirks, sense of humor, and more.

Writing styles are seasoned with these influences as well.

An author’s cultural background is a rich resource all writers rely on. When we create characters, we draw from it. When we set up motives and conflict, we build on it. When readers and writers settle into a comfortable relationship, they have found common ground that makes it easy to enjoy the story. No one has to explain those little things that both sides know.

If you’re satisfied with that limited range of audience, then you can settle in, produce your stories—like comfort food—and enjoy. But remember this: when you want to create a character that comes from a different background, you will inevitably dress a familiar type in foreign clothes. In other words, your cultural habits will have you assigning thoughts, motives, and ideals to your new ‘immigrant’ that come from the same pool as all your other characters.

Mastering other cultures enough to describe them accurately, on the other hand, could be daunting. Yes, you can research and learn enough to come up with a decent facsimile, but you would have to repeat that every time, and the odds are, your own cultural background would still shine through.

Sometimes I like to watch foreign shows just to look for unique cultural elements. Recently, I watched a program filmed in Vancouver that had a distinctly Russian feel to it. The main actor was a Russian who spoke with an accent. Everyone else should have appeared Canadian, which I find familiar, though not identical to U.S. style. But the whole show—filmed with English dialog, not dubbed—felt Russian.

*TIP: As people, there are some things we all have in common: the struggle for life, safety, and well-being. A desire to love and be loved. The need to find fulfillment in our lives. Experiences such as loneliness, suffering, and loss, or relief, joy, and pride. Flesh out your characters with some of these things, and they’ll be universal and more believable.

Everything we write is saturated with our values, even when, or should I say, especially when, we think they aren’t.

Individuality, independence, and the freedom to make one’s own decisions are very American ideals, and while American authors may never think about it, these standards are woven into the fabric of our stories. Even dystopian fiction that highlights the loss of these ideals still grants them importance. “Blade Runner 2049” comes to mind.

Authors often indulge their fantasies in books, and I’m not talking about the obvious. On a more fundamental level, they set up scenarios, governments, societies, and such, that permit (or restrict) things they believe in or wish for. The Harry Potter books are a great example of this.

*TIP: Embrace your values. They can’t be avoided. Identify some of them and look for ways to make them appealing or compelling. Writers are always promoting ideas with their stories, whether it’s lighthearted fun or political satire or profound social commentary.

I’ve decided to pick on old-timers who can no longer defend themselves, and hopefully avoid offending anyone. As a fan of classic sci-fi, I’ve enjoyed a lot of famous books by Asimov, Clarke, Bradbury, and Heinlein, to name a few—but in order to do so, I had to constantly ignore the shallow ways they painted women. One of the more absurd examples: in “Caves of Steel” the main character’s wife accidentally joins a terrorist group, because she didn’t know any better, thinking it was just a social thing, and when she finds out her blunder, she cries, and the men basically laugh it off. The robot had more character than she did.

Here’s an insane example of racial bias. In the original Tarzan books, the boy raised by apes and trained in all their behavior had no trouble adopting British speech, mannerisms, skills, and cultural posh in a matter of months, simply because he had noble parents of good breeding. It was in his genetic makeup, apparently. The author, Edgar Rice Burroughs, also gave him a flair for murder. Unrestrained by a childhood in England, he was free to viciously kill people with his bare hands without remorse when he saw the need. It makes me wonder if Burroughs was a bit bloodthirsty.

All people share a common denominator regardless of gender, race, age, upbringing, social status, or any other qualifier you can think of.

*TIP: Put yourself in the mind of characters that aren’t like you and ask yourself if you feel dumbed down or uncomfortably shallow. Look for a way to add depth.

The more slang and expressions you use, the smaller your audience. The way we talk is regional, local, limited to the groups we hang with. This includes the electronic worlds of online games, social media, Youtubers, and shows, in addition to the more obvious, classrooms, work environments, etc.

If you want to bridge the gap to ALL English speakers, use words that mean what you intend for them to mean. “He was always yelling at the boy,” may sound harmless to one reader and distressing to another. If the person was actually yelling and the intent was abusive, this will work, but if it was meant to be taken lightly, change the wording. “He often scolded the boy…” for example.

Swearing may be acceptable in many places, but it isn’t universally so. In some cultures, it can give a poor impression of the author, or imply that the writer lacks skill.

*TIP: Don’t let language drive away some of your readers. Make the use of strong language intentional and specific, appropriate for the character and the scene, without overdoing it. Any word used carelessly and repeatedly will diminish the impact of the writing.

It’s unlikely that you would find anything like Tolkien’s Hobbits, and their love of good food and gardening, in a book written by Orson Scott Card. But both authors value the innocence of youth. In LOR, they fight to preserve a world where it can exist. In Ender’s Game, the story laments the loss of childhood.

Authors vary greatly in the influences that shape their writing, but there are places where all should meet—at the core of what it means to be human.

What you can learn from them about developing your style as a writer?

Watch the blog for bios, find one that interests you.

Then pre-order Rogue Skies to get their book!

While you’re at it, get the free gift of 19 stories,

and you can start reading right away!