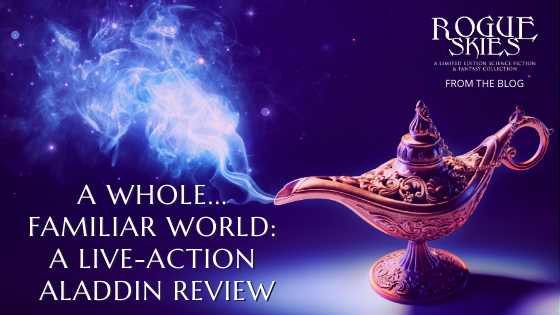 A dazzling place I sort of knew…

But at my desk here,

It’s time to share my Aladdin review with you

Don’t let my spin on A Whole New World fool you. I really enjoyed the new live-action version of Aladdin!

As a child of the late eighties, I grew up during the Disney Renaissance. This was when the Disney animated movie Aladdin first premiered, alongside some of my other favorite Disney films. I grew up humming Part of Your World, A Whole New World…

Basically, if there was a world, I was singing about it.

So this new era of Disney films that are live-action adaptations of the movies is, for me, a great time to be alive! I get to experience media that I love in a new way.

I was super excited for Aladdin in particular. Of the films that Disney’s chosen to adapt in this live-action format thus far, Aladdin may just have been my favorite.

And yet, I was the slightest bit apprehensive as I walked into the theatre to see Aladdin. I’d heard lukewarm to negative reviews of it at that time, so I wasn’t sure if it was going to go well.

I thought Will Smith played a DELIGHTFUL Genie.

Mena Massoud had the sheepish charm I expected from my Aladdin.

Naomi Scott embodied Jasmine and her wish to do more than women were traditionally allowed to do.

And at one point, I laughed so hard I was nearly in tears.

This live-action film took everything I loved about the original Aladdin and added new things to love. It told us more of the Genie’s future. Jasmine had a BFF in her handmaiden played by Nasim Pedrad.

Pretty much my only major complaint is that I didn’t care for the new song Jasmine sings entitled, “Speechless.”

Actually, that’s not entirely true. The original rendition suited me fine. I thought it flowed well in the context of the movie and Naomi Scott has a beautiful voice.

But the reprise, in particular, I found… awkward given the directional and filming choices made around it. And the subsequent speech Jasmine gives after said reprise also struck me as a little cheesy and over the top.

Still very small complaints in an overall enjoyable spin on a Disney classic.

If you’re looking for the same story you adored as a kid with new elements to love, I suggest you see this one yourself