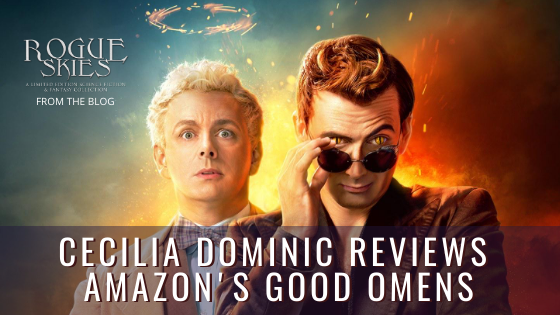 At its heart, Good Omens is a story of free will vs. fate. Most of the characters, whether they’re angels, demons, a witchfinder who’s obsessed with how many nipples people have, and the descendant of a witch, move through the stories driven by prophecies and their perceived purposes and fates. The two main characters Crowley the demon and Aziraphale the angel, have enjoyed living on earth for long enough that they don’t want to accept the inevitability of Armageddon. They try to choose their own paths, mostly so they can keep hanging out, drinking Châteauneuf de Pape (a red wine from France), and eating at fancy restaurants.

I feel I should go ahead and get my disclaimer out of the way. I have not read the book, so this is only a review of the six-episode television series currently available on Amazon Prime. Because I needed to give Amazon yet another way to worm itself into my life.

Further disclaimer – I’ve likely not read Good Omens because I’m not a fan of Terry Pratchett. I tried to read the first Discworld book when I was in my twenties and hated it. In fact, it has the dubious distinction of being the only paperback I’ve ever returned to the bookstore. I’d only read a couple of chapters, and I’m very careful about not creasing spines. It still looked new, and I’m hoping they re-shelved it for someone else to find and enjoy.

I do, however, like Neil Gaiman and his “pay attention because this small detail will be important later in ways you never expected” style. He’s not what made me want to watch Good Omens, though. I came for David Tennant, and I stayed for Michael Sheen.

That brings me to the first review-ish part of my review – the acting. The two leads were brilliant. Tennant as the demon Crowley was at his over-the-top physical acting best, and he gave me several laugh out loud moments. And one “aww,” when he finally expresses his feelings about his best friend. As for Michael Sheen, he quickly became my favorite, and he stole the show as the gentle-hearted angel Aziraphale. His style is more subtle and restrained, and he has the best small but super effective movements and expressions. I wanted to hug him the whole time. Or go drinking with him. They are both totally convincing as enemies who decided to stay out of each other’s way and then developed a celestial bromance over six thousand years.

Some of my Facebook friends complained about the voiceover narration by Frances McDormand, who also voices God. I didn’t find it intrusive, but I don’t think it was necessary even if there were some funny lines.

I do have to give Amazon five stars for the look and feel of the story, especially the settings and costumes. The demons were icky. The angels were also not entirely pleasant to look at but in a different way, too neat and buttoned-up. I liked the contrast of Hell as a dark, drippy, cluttered and concrete subterranean office and Heaven as the opposite, all glass and steel with skyline views and hardly any furniture. I guess angels don’t sit.

As for the other actors, it was fun to see John Hamm as the archangel Gabriel, whom he portrays as arrogantly as he did Don Draper, but with the opposite attitude toward pleasures of the flesh. He’s nice to look at, and I won’t complain, but I never could suspend disbelief and stop realizing it was John Hamm. Nick Offerman also had a twist on a familiar character type for him. In this case, he’s a government official who actually likes his job, as opposed to his Parks & Rec character. He was only in a couple of scenes, and he was clean-shaven, so I could forget who he is until he talked.

My main critique of the series is the pacing. I didn’t feel that the story truly picked up until halfway through episode three, which is when they decided to put the opening credits for that episode. It’s Amazon, they can do what they want. Prior to that, it felt like a lot of setup and backstory without much to move the plot forward. Sure, in true Gaiman style, it all became important later but maybe could have been better handled a different way.

I give Good Omens four stars. Hubby hasn’t seen it yet, and I’ll happily watch it again with him, but it’s not something I’ll purchase for viewing in the long future.