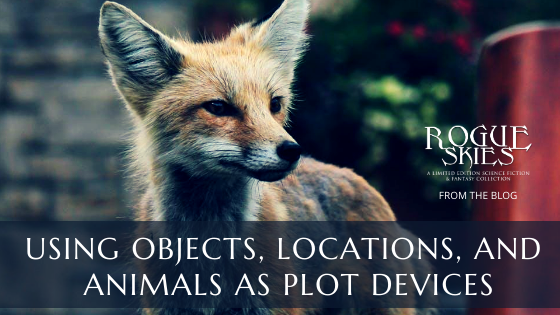 In theater, they call them props. Comedians can make a whole routine out of an object. In movies, the camera can foreshadow developments by focusing closely on seemingly harmless objects.

Writers can use props in writing, too. Bringing in ordinary things like objects, locations, and animals to pace and direct the story can slow it down, shift direction, set the stage for action.

Want to get creative with plot devices? Here are a few practical tips — tools for getting out of a slump or a bind.

Anything that moves the plot forward is a plot device. If the story is a disaster tale following a hurricane, then obviously the storm is a central device. You probably already know what to do with these kinds of major plot devices. The ring in LOTR. The scar in Harry Potter. The T.A.R.D.I.S. in Dr. Who.

Sometimes, though, when you’re having trouble moving the plot, it’s the small props that work best.

“A woman is standing on a street corner in midtown Manhattan, staring vacantly at the walk sign.” The author is floundering until… “A man with a heavy overcoat and a hat pulled low over his eyes taps her on the shoulder, hands her a piece of paper, and disappears into the crowd. It’s a train ticket…”

A piece of paper becomes a turning point for this scene. But location made it work.

What else could have moved this woman along—just about anything. The real question is, what do you want to show about her? Maybe it will be obvious in a train car, or a restaurant, or a bathroom.

Here’s an example of setting the location to fit the need. In the “Fellowship of the Ring,” Frodo is hiking out of the Shire with Sam, and they run into Merry and Pippin. Peter Jackson, the film director, needed to get them from the field into a decent place to hide before the creepy Nazgul showed up. He had the hobbits fall down a steep hill right into the perfect spot.

What about the scene you’re working on? Will leaning out a window make a difference? What about tripping over something and ending up on the floor?

Thought prompt: Take the most unlikely place you can think of within the boundaries of your current scene and put your character(s) there. Don’t think of what you need them to do. Think of what they would do or might do there. Let the location interrupt the flow and see what happens.

Active prompt: Try going to different rooms in your home, or places in the city, or outdoors, stand in a place and think, What might happen here to your character?

Animals are popular plot devices. Certainly, authors are known for having cats and including them in their twitter feed.

We’re familiar with animals as significant plot devices, as characters in stories. We’re probably less used to thinking of them as small tools to redirect the plot. How can a creature rescue a dead scene?

By just being themselves.

Look at the animal. Watch what they do. Are they irritating or entertaining or dull? Would those reactions fit your character or help change the mood of a scene? If you bring in an animal and pay more attention to it than it’s worth, this will fail, so keep your focus. What matters is how your characters respond, how your situation develops.  Give them just enough attention to make their influence believable.

Let’s say you need a valuable necklace to disappear from a room. Bringing in a dog to pick it up in its teeth and run off with it may work for children’s comedy movies, but most of your readers will be frustrated by this. It would be more believable for the dog to be noisily licking its paws to the point where an impatient character throws a bag (with the necklace) at it without thinking. And the bag falls behind a piece of furniture.

Thought prompt: Choose the character you’re working with and focus on how they would react. Try out bringing several animals into their presence and see how it plays out. Do any of these provide a plot turn that works as you want?

Active prompt: Find someone with a personality like your character. Watch them interact with animals or ask questions about them. What animal would be best suited to lead or push that person the direction you want?

Writers ought to include interacting with objects into their scenes instinctively, but that’s not necessarily the case. Sometimes we forget to describe the things we picture, or we underestimate what is needed to paint the scene. In a fight, for example, we describe the weapons, but what about clothing (a sleeve that catches on something) or bumps in the ground or furniture?

The possibilities are endless when it comes to choosing an object.

Here’s an example of a prop that served many purposes in a short amount of time. In the original Star Wars movie, when Luke was training on Han’s ship with his father’s lightsaber, there’s a little round object that moves around unpredictably zapping tiny beams at him. At one point, Obi-Wan instructs him to put a blind helmet over his head and “use the force.” It turns out that he can anticipate the globe’s shots better using the force.

This device provides a powerful transition in the story, capturing a moment of training, learning about his powers, a break from the chase, building an idea of his relationship with Obi-Wan, a chance to rest, a little more filling in the gaps of the story—all in the space of one brief scene. After that, we begin to think of Luke as a budding Jedi and are prepared for the acceleration of the story that doesn’t let up until the end.

It was just a floating ball.

Thought prompt: Think of a skill your character has that you intend to bring into the story later. Come up with a couple of objects that could serve as props for demonstrating that skill before it’s actually needed.

Active prompt: Go around your house and pick up random objects, then imagine your character interacting with it. Act it out or pantomime what they would do if it’s beyond your capabilities.

In “Cascade,” the book I wrote for “Rogue Skies,” there’s a small prop that meant little when I added it, (a tiny piece of aluminum foil), that became an unexpectedly significant part of the story. I chose it because it fit the character and it made waves to the end of the book! Pretty exciting stuff.

Don’t be afraid to try ordinary props as plot devices.

There are 25 authors in the Rogue Skies set with a multitude of styles and approaches to using props in their plot. There’s so much you could learn from them! Get your copy today for just .99!