Why We’re Obsessed With Stranger Things

Why We’re Obsessed With Stranger Things 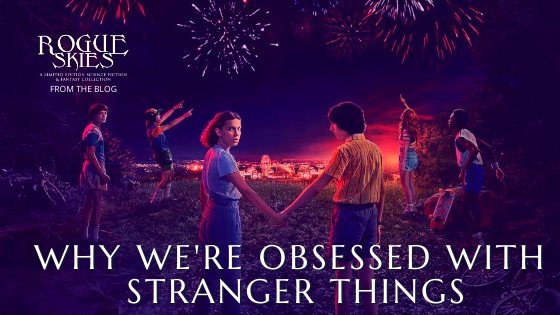 Unless you’ve been living under a rock, you at least know about the existence of the Netflix original show Stranger Things. The show first captured masses of attention when it premiered July 15th of 2016, receiving critical acclaim for its homage to classic genre films of the 1980s. And the fever has continued over into its third season which just premiered this past July 4th! Netflix and Neilson reported a record-breaking 26.3 million viewers of the show during the 4-day holiday weekend! I was one of them! But I’m obviously not alone! So, what is it that makes so many people obsessed with this show?

There is no doubt that nostalgia about the 80s has a huge part to play in our love for this show. This is especially true for millennials like me, who feel as if we’re stepping back into our childhood. We remember what it was like to grow up in that era, and I’m sure that helps us relate to the characters even more! There are several throwbacks to old brands, logos, music, and styles that will have you digging out your leg warmers and daydreaming about that awesome Lisa Frank trapper keeper from way back when!

There is a certain atmosphere to the show that leaves you constantly on edge, but not quite terrified! Instead, you are invested in the fate of the characters and find yourself on an adrenaline ride for most episodes!  With villains called demi-gorgons and mind-flayers, not to mention secret Russian operatives and evil doctors, there’s always something to keep you on the edge of your seat!

There are so many great friendships on this show. First, there’s the connection between Mike and Eleven, and then the rest of the gang! They eventually become a well-oiled machine of kids ready to die for each other! Joyce and Hopper also have a wonderfully playful relationship built on trust. Dustin and Steve have one of the best dynamics ever! Steve basically becomes Dustin’s big brother by 3rd season, and we love it! This season also saw the addition of Robin and a greater role for Erica who both meshed splendidly with Steve and Dustin to form the Scoop Troop!

If there’s one thing this show knows how to do, it’s develop its characters! And no one is who you think they are when they are first introduced! Misdirection and life changes abound with the characters of Stranger Things. We soon learn that Nancy is not just a popular girl. Crazy Joyce Buyers is actually pretty damn smart and adaptable. The gruff Sherrif has a soft side. And the self-serving jock actually has a huge heart and a protective nature.

The music of the 80s was a melting pot of disco, early grunge, punk rock, metal, and pop that shaped the lives of music today. Stranger Things has embraced every single genre and boasts a soundtrack that has something for everyone! From Abba to The Neverending Story, 80s fans can rock out to every song on the show by visting TuneFind here.

One thing is for certain, after that finale, we can’t wait for Season 4!

Once you’re done binging season 3 of Stranger Things, why not indulge in a good book…or 25!
Rogue Skies is now on preorder and contains 25 Fantasy and Science Fiction stories. And don’t forget to grab your copy of Rogue’s Gallery as your free gift for getting Roge Skies!