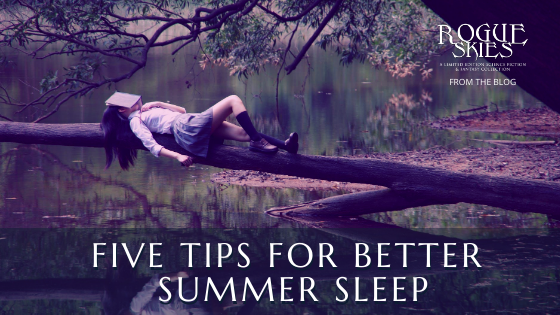 Ah, yes, the lazy days of summer…for some. For us sleep psychologists, it can be the busiest time of the year. I suspect that’s because people’s schedules are more open with school being out, but summer has its own sleep challenges. Let’s talk about how to combat the most common ones.

Chill out… at night.

The ideal temperature for sleeping is well below summer temperatures for most of us in the continental United States, especially those of us here in the Southeast. Thank goodness for air conditioning, right? Many people will turn the house temperature up during the night to save energy. While it’s true that we may not need it as cool, turning the thermostat up past about 75 degrees may still interfere with sleep. Since a good night’s sleep is priceless, it may be worth a higher energy bill.

Nothing says summer like a tall glass of iced tea, frozen coffee beverage, or, for later, margaritas, white wine, daiquiris… However, a lot of people aren’t aware of how long caffeine sticks around in their systems. For some, the half-life of caffeine – the amount of time it takes for half of it to work out of their body -. is 7 hours or longer.

As for the adult beverages, alcohol may help you feel sleepy early, but it can make you more restless later on.

Does this mean you shouldn’t indulge in those frosty summer drinks? Not at all. Just consider your timing. Cut out caffeine at least eight hours before bed and limit yourself to one alcoholic beverage, two if they’re not gigantic, and stop drinking alcohol three hours before bed.

Just as summer drinks can ding our sleep, summer foods can be problematic. Think about summer events – picnics, cookouts, barbecues, clam bakes… Okay, I’ve never been to a clam bake, but I’d love to. These things tend to involve eating a lot and happen in the evenings when it’s cooler. However, eating too much too late sends the wrong signals to our bodies. Also, while you don’t want to go to bed hungry, it’s also not good to go to bed too stuffed.

As for those late-night bowls of ice cream or popsicles, their high sugar content could mess with your sleep and pack on the pounds.

Again, moderation is the key.

Be bright about light.

Here in Atlanta at the height of summer, it doesn’t get fully dark until around 9:30 p.m. Since daylight is our body’s main signal for when it’s time to be awake, this can be confusing on many levels. My husband and I, who both grew up on the other side of the time zone divide, often catch ourselves thinking it’s earlier than it is. This has a cascading effect of often causing us to eat too late and to stay up working too long. I’ve started setting a bedtime alarm so I know when it’s time to turn off my screens and start winding down.

Sorry, I know we don’t want to start thinking about school starting quite yet, but it’s coming. At least that’s what the displays at the office supply store said. If you and your family have been sleeping in during the summer, gradually shifting earlier can make that first week back to school much less painful. Try to shift schedules earlier by 20 minutes every few days.

Of course one of the best things you can do to help yourself sleep is to read before bed. Just be sure to do so on a non-backlit screen or in a regular paper book. Rogue Skies will be out in September, but you can grab several stories to read now in our companion set Rogue’s Gallery, which you can grab through this link once you preorder Rogue Skies.