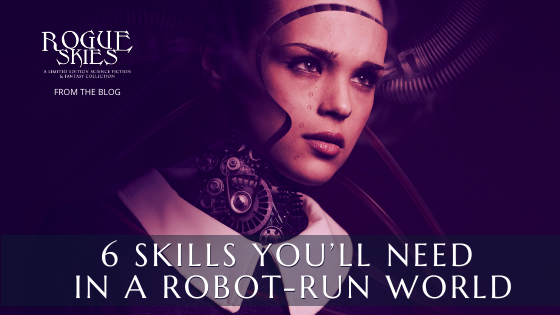 It’s not that farfetched to say that one day in the not too distant future robots will be as commonplace as cell phones are today. Do you remember when phones didn’t work without a cord? It was a big deal when cordless phones could be operated as far as fifty feet from their bases. Then cell phones spread the astounding capability of taking your phone with you—wherever you went—connected to the telephone network via satellite!

It’s not that long ago that phones were only expected to be used for, well, making phone calls. Now, we access the entire world on the internet via cell data and get frustrated when there’s lag time. Our phones are computers, cameras, TVs, art stations, banking depots, shopping centers, security devices, gaming consoles, and more.

Robots will probably become a natural part of our lives, too, if the tech progression continues.

What can you do to be prepared?

Here are six skills you’ll want to have in a Robot-Run world. The first three are appropriate and expected. The second three are more… um, creative.

Remember: People designed the robots and coded them according to the way humans think. People wrote all the stories that paint a terrifying future of robot takeovers. People manufacture, sell, manage, and trade robots for their purposes.

If there is ever a robot catastrophe, there will be humans behind it.

Now you’re ready for the future, and a bundle of great sci-fi and fantasy books will whet your imagination for all the possibilities. Have you preordered Rogue Skies yet? 25 books for $0.99 is too good to pass up!  Get your copy today for just .99!