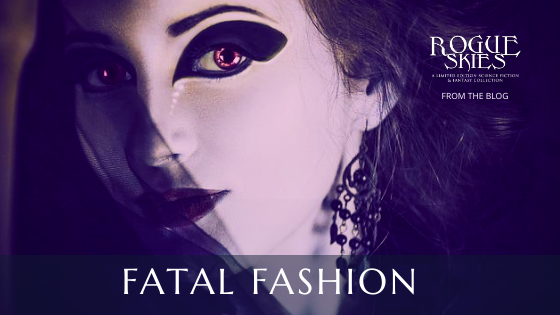 We think of clothing as a means of self-expression—fleeting or classic, occasionally silly, and frequently entertaining. Rarely do we think of adornment as dangerous, but history is filled with literal fashion victims.

Rewind to the beginning of the nineteenth century. Clothing was dyed by natural sources, so unless one’s wardrobe was exotic and very expensive, color choices were dull compared to what we have today. Then when the whale oil used in domestic lighting was slowly replaced by coal gas, the gas industry produced coal tar, and industrialists began experimenting to find a use for this by-product. The result was gorgeous aniline dyes, which created an explosion of bright, clear hues of every description that were affordable to everyone. Predictably, the fashion pages became giddy rainbows of choice.

There was only one hiccup—there were no rules about testing these new products for consumer safety. With chromium, mercury, and arsenic in the mix, this rapidly became an issue. While the solutions in some fabrics were relatively harmless—perhaps because they were not worn next to the skin—others, like the gaily striped stockings in vague during the 1860s, were activated by heat and perspiration. Consuming alcohol could also speed the action of these toxins. Blisters, rashes, and even death followed, particularly among the factory workers who handled these materials without protective gear.

These new shades were also used in home décor, candy manufacture, and artificial flowers. Green had a particularly nasty reputation, since its key ingredient was arsenic. The pigment Sheele’s Green was a particular favorite of Napoleon Bonaparte. There is some suggestion the arsenical paint on his walls was a contributor to his eventual death.

There is a saying about walking a mile in someone else’s shoes.  Be careful what you’re getting into! If you were in old Venice, those shoes might be chopines. These platform shoes proved disco had nothing on the Renaissance. Originally arriving from Turkey in the 1400s, they were invented to lift the wearer out of the mud of the streets. The style lasted in Europe until the mid-1600s. The height of the heel also became linked to the status of the wearer, and both noblewomen and concubines wanting to make a statement had them.  While many examples of chopines are around seven or eight inches high, other examples reach twenty inches. Women required canes and servants to move around, and there is more than one story about women falling to their death. Laws were passed to limit the height of the shoes but to little effect.

Cosmetics were another pretty way to die. Queen Elizabeth I was reported to use Venetian Ceruse as a skin whitener. The paste was a mix of vinegar and white lead and was apparently applied quite thickly. A popular companion to this white base was cinnabar or vermilion rouge, derived from mercury and Sulphur.  This duo, while the height of Tudor fashion, caused skin eruptions, hair loss, and bleeding gums.

To complete the look, women used Atropa belladonna (deadly nightshade) to enhance their eyes. Belladonna means beautiful woman, and a drop or two dilated the pupils to enhance a dark, enticing gaze—right up until increased heart rate, visual distortion, and eventual blindness took over.

The list of potentially fatal fashions goes on and on, from combustible crinolines to young girls removing ribs so their corsets could be cinched that much tighter. Lest one think women alone were subject to dangerous dress, the mercury used in felting men’s hats was well-known to produce “mad” or at least very sick hat makers. Even setting aside the hazards of sweatshops, it was a dangerous time to be in the clothing trade.

Have we escaped such madness in the twenty-first century? I’m not so sure—we have our own version of fashion madness, though hopefully nothing quite so drastic. All the same, if someone tells me they’ve discovered a trend to die for, I’m running the other way!

There are 25 authors in the Rogue Skies set with a multitude of fashion ideas and fantastic weaponry for thier characters. There’s so much you could learn from them! Get your copy today for just .99!