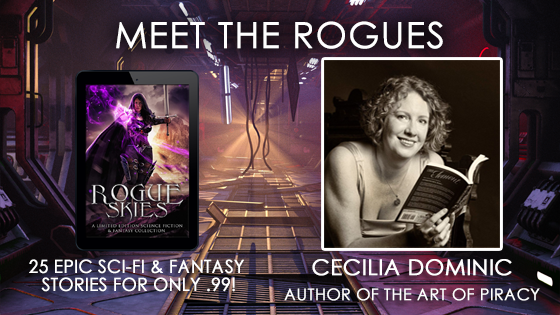 According to my mother, I wrote my first story when I was two years old. I, of course, don’t remember this. I’ve always delighted in stories, though, and I remember being in elementary school and loving those pieces of paper with a blank spot on top for a picture and lines on the bottom for text. Being a girl in the 1980s, I recall lots of unicorns. Man, those things were hard to draw!

My writing activities waned in college, and I picked it up seriously again in graduate school when I came across an issue of Writer’s Digest at a bookstore. After having been in the world of academia where you write articles for prestige and promotion, not money, it blew my mind that people actually got paid for writing. I put fingers to keyboard, wrote a fantasy short story, and off I went.

My little sister, who is a feisty redhead, may or may not have inspired one of the main characters in my Dream Weavers & Truth Seekers urban fantasy series. It annoys her that I won’t tell her which one. 😊

That particular series is set in and around Decatur, the corner of Atlanta that I live in. It’s a fun little town with a reputation for being different and quirky, so it was easy and fun to add magical elements.

What is your favorite/most frustrating part of the writing or publishing process?

My favorite part – research and spending time in worlds that aren’t my own. I love watching my characters do their thing, and when they start to act on their own… That’s magic.

The most frustrating part is trying to get my books in front of readers. It’s tough with all the competition for attention, and I’m always so excited when someone says they like to read. I always want to hug them, but I refrain unless invited to do so.

What inspired you to write your last book?


My last book, the second full-length title in my Dream Weavers & Truth Seekers story, was titled Web of Truth, and it features Morgan le Fay, the character from the King Arthur stories. I adore Arthurian legend and have always wanted to play with it. In the book, Morgan has been indentured to the Fae Queen for the last ten centuries. She has just one more bounty to bring in before she’s free and can regain the powers she lost when she unwittingly helped to bring about the fall of Camelot. It’s supposed to be an easy task – how hard could it be to capture a fledgling vampire? But Philippe ends up capturing her heart.

The villain in my Rogue Skies book is Captain Rouge, the pirate captain of the airship La Belle Rouge. He’s powerful because he has the absolute loyalty of his crew, who will carry out his commands ruthlessly and precisely. He also takes hostages, not only people, but people’s lives via blackmail or other dark means. Once Rouge has you in his clutches, you can’t escape his influence, even if you manage to leave the airship, as my hero has found.

Do you have a favorite scene in the last book you wrote? Tell us about it.


My favorite scene in Web of Truth is when Morgan captures Philippe by taking advantage of the fact that he’s been feeding on drunk birds. You’ll have to read it to get the full effect, but it’s hilarious. I remember laughing when I wrote it.

Who designed your book cover?

What is the best resource for authors?

Experience. There’s nothing like going to a place or learning about something hands-on. For example, for my Dream Weavers & Truth Seekers series, which features detectives as the heroes, I did the Decatur Citizens’ Police Academy so I could not only get the details right but also to see how the policemen think and feel about situations.

Do you have a day job? Does it help with your writing?

I’m a clinical psychologist with a specialty in behavioral sleep medicine. As much as I try to keep the two separate, elements of sleep science keep creeping into my books. For example, a big part of my Dream Weavers & Truth Seekers series takes place in the Collective Unconscious, which is where dreams happen. One thing that’s surprised and delighted me is how much my writing helps with my day job. I feel like it makes me a more creative, and therefore more effective, therapist.

Do you have any advice for aspiring writers?

I recently read a quote that went something like, “Luck is when preparation meets opportunity.” It’s tempting to give up when it seems like things aren’t going like you’d want them to, but persistence really is key. Whether it’s with the book you’re working on or with your writing career in general, things will fall into place, but you need to be looking for them and to be prepared. Also, it’s always possible to pivot and change course, and there’s no shame in doing so. Sometimes failure is the best teacher.

The inaugural flight of a luxury airship turns deadly as pirates, a rogue nobleman, and a disgraced historian race to find a priceless- and powerful – piece of art that’s been hidden on board.

Veronica Devine is determined to return home in triumph and show the family who disowned her that she’s made it as one of the world’s premier art historians. Her one chance – escort art rescued from an abandoned chateau to the new art museum in Terminus. A simple airship trip over the Atlantic aboard a luxury liner promises to be a much-needed break and a chance to get her head on straight before facing the disgrace of her past.

Luc, the Marquis de Monceau, abandoned his chateau in the face of the Prussian invasion and is determined to recover one of the pieces. The problem – he can’t reveal who he truly is, or he’ll be arrested for aiding pirates. The other problem – he’s not sure which of the paintings he’s searching for since the information he needs is hidden in the art itself. Perhaps the beautiful art historian who’s escorting the collection can help him.

As clouds gather above, the ocean surges below, and air pirates pursue the ship. Veronica and Luc – locked in a dance of hidden identity, secret passions, and past betrayals – need to figure out which piece of art holds the key to unlock a metaphysical mystery, or else the pirates will be the least of their problems. Sometimes the clearest skies hide the deadliest secrets. 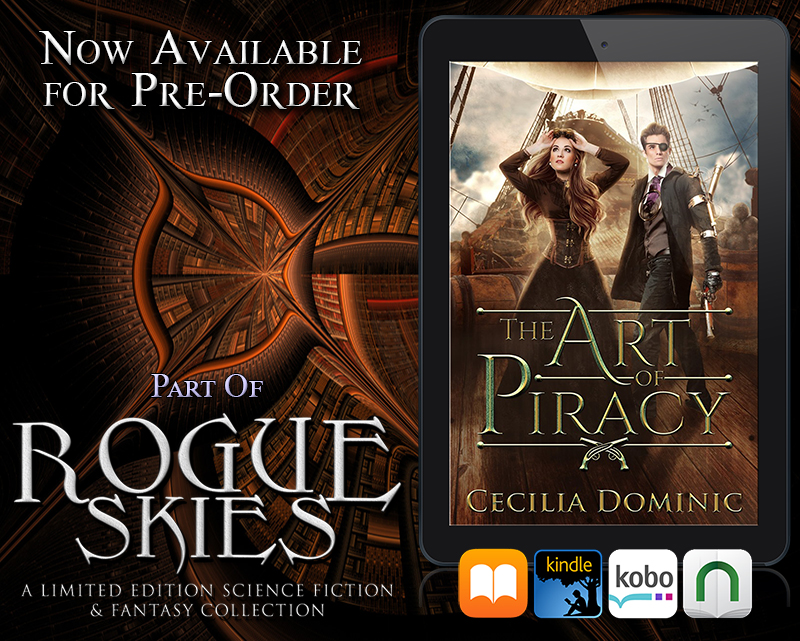 The Art of Piracy is just 1 of 25 stories awaiting you inside Rogue Skies!