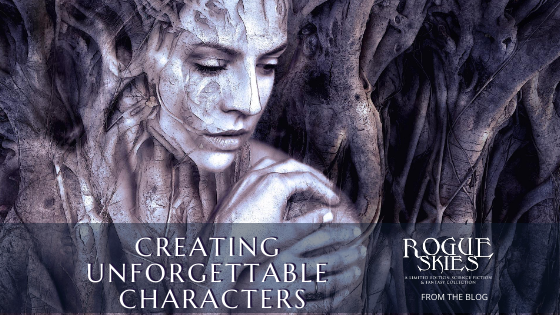 A good book is filled with people we feel we’ve met. We imagine meeting them on the street, or that their name might show up in our inbox.  They exist both inside the book and in an extended version of our own reality because they’ve become part of our consciousness. They think, talk, and act in unique ways that aren’t exactly predictable, but they are knowable.

As a reader, we know these unforgettable characters when we meet them. As a writer, it’s not always that simple.

How Do We Create a Character?

There are plenty of books on the topic and they’re all probably right for some author somewhere. Psychological profiling, archetypes, questionnaires—whatever it takes to get the job started is fine if it works. In truth, I don’t use any of the above until much later in the characterization process. My cast tends to walk into my head and start telling me a story. This is simply my flavor of madness.

Once the story is populated, the real work begins. A hero is fine—a hero who is a puzzle to be solved is so much more enticing. Put another way, the worst-written characters are the ones who fulfill all our expectations. The best ones take us by surprise.

What makes Dr. Jekyll and Mr. Hyde interesting? Spike and Angel from Buffy the Vampire Slayer? Mr. Darcy? Ebenezer Scrooge? They fulfill obvious expectations, but deeper down, they have impulses that are the precise opposite of what they seem. Mr. Darcy appears cold and proud, but he’s really

loving and thoughtful. Scrooge is a horrible miser, but he has the capacity for generosity. And our darling vampires are nothing if not contrary.

Putting characters into conflict with each other is necessary to build a plot. Putting them in conflict with themselves makes them infinitely more interesting. Those mentioned above are memorable enough they almost exist outside the stories that spawned them. We may or may not remember the specifics of Jekyll and Hyde, but Stevenson’s character has become an icon for a double life.

Let’s build on this idea some more:

One arc or two or three?

How-to books mumble on about how a story needs a plot with rising action, a climax, and conclusion. Essentially, this is like the clothes hanger for the story—we need a plot structure to provide shape so the book is not one big stream-of-consciousness word barf. There are also character arcs, in which a protagonist grows through internal struggle. If your characters don’t cross the finish line with more self-awareness then when they started, we wonder why we spent 300 pages cheering them on. That’s why authors use both an external and internal story arc to accommodate a character’s conflict with the world plus their conflict with themselves.

Let’s use The Lord of the Rings as an example:

I’ll keep using Frodo as an example. What Tolkien does is interesting. Yes, there’s a good versus evil fight for Frodo’s soul, but the conflict has another significant aspect. Throughout the trilogy, there’s a theme around the survival of community. The elves are dwindling. Mines are abandoned. The industrial revolution rampages through the Shire. Even the Fellowship gets sundered early on. Community and cohesion are difficult to maintain in a fading world.

Frodo—the bookish heir of a rebel uncle—becomes the poster child for this thread. He’s an orphan among a people defined by its blood ties. He’s got friends, but generally speaking, he’s outside the norm because of his association with Bilbo, a respected figure but a definite misfit. From there, Frodo becomes increasingly separated from the herd. He loses Bilbo to Rivendell, has to leave his home, and is eventually singled out because of the ring. There is no question he loves the Shire and all it represents, but his ties to it gradually fall away until he leaves Middle Earth altogether.

While this progression of isolation overlaps Frodo’s battle with the ring’s power (good versus evil), it’s also a microcosm of the land’s changing nature and forms a secondary dynamic arc (community versus abandonment/withdrawal). This secondary arc adds a melancholy depth to Frodo’s story. Imagine the change of tone if Frodo went home at the end, had a pack of kids, and drank beer with Sam for the next forty years.

Adding a third arc—one intimately tied to the overarching theme of a story—supercharges the character by creating a resonance that extends beyond their individual circumstances. They become larger than life because they mirror the bigger landscape. The trick is to manage this secondary arc with a light hand—too much and it becomes a ponderous sledgehammer.

To summarize, there is no right or wrong method of writing characters, but inner conflict—especially with contrary impulses—will make your protagonist interesting. Adding multiple arcs to the character will further boost their complexity. After all, real people have many issues in their lives. It stands to reason a realistic character will, too.