Why We Still Love Buffy The Vampire Slayer

Why We Still Love Buffy The Vampire Slayer 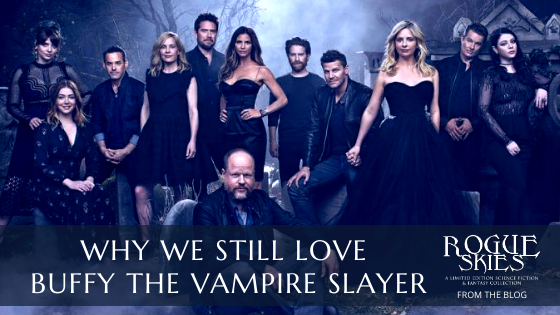 On March 10th, 1997 we were introduced to Joss Whedon’s cult classic, Buffy the Vampire Slayer…and if you’re anything like me, you haven’t shut up about it since! It’s been over 20 years and the show continues to both keep it’s following and engross new viewers! But what is it about Buffy that makes us love it decades later?

Is it because Buffy was one of the first shows to really champion girl power in modern media? It’s hard to imagine a time when girls didn’t kick ass on tv and in film with the mass release of superhero and paranormal heroines of today’s time, but the Buffster really helped pioneer the idea that a girl could deal with both high school and the undead!

Not only did Buffy handle all the creepy vampire and demon stuff, but many of the villains on the show were metaphors about growing up! What better way to navigate puberty than to kick a demon’s butt and learn a valuable lesson?

Be you Team Angel, Spike, Riley, or any of the mighty-blonde-one’s other romantic partners, Buffy was a shop that that hit the internet-connected world right at its peak, sprouting fan forums, websites, AIM chats, and Yahoo groups (not to mention, fanfiction and fan video sites!) devoted to pairing Buffy with her one true love. (Spuffy 5-ever!)

Nerf Herder really knows how to write a catchy theme song! You know you imagined yourself dancing at the Bronze to the sweet sounds of that guitar!

Speaking of dancing, the Buffy Musical, Once More With Feeling was an epic feat that hadn’t really been done by many other tv shows at the time. How many of you had the CD, the script, and the VCR recorded version of this episode? Anyone else write down all the words in your own songbook before the official one came out?…No, just me? *shrugs*

Let’s face it, Willow Rosenburg was bad-ass! Throw in Tara, Giles, Wesley, and a slew of other characters who eventually cast a few spells and we were in awe! Don’t act like you never recited any bad Latin passages hoping to solve your problems. The best thing we all learned is that magic comes at a cost, and that abusing power can get you into some serious trouble…or ya know, flayed alive, depending on who you are.

Before Buffy could the simple mention of these fluffy creatures bring a ginormous smile to your face? Bless Anya for bringing this one to us!

No one was prepared for a teen show to tackle such serious issues as suicide, abusive relationships, and losing a loved one. In what has to be one of the finest hours of television, The Body had us all in tears, greaving Joyce Summers and wanting to Emma Caulfield an Emmy for that fruit punch speech.

The Puns and Humor

This show was filled with pun gold. The humor was smart and wasn’t dumbed down for the audience. It also gave us some seriously crazy/awesome insiders!

One thing Buffy always kept was the hope that with one more battle, or through the continued efforts of good people, that the world could be a better place. I think that sentiment is one that endears the show to our heart forever. We take the characters with us, carry them in our hearts, and even emulate them when times are tough.

You know what also has kick-ass females, scary villians, and tons of humor?  If you guess Rogue Skies, you’d be correct! There are only a little over 2 weeks to snag your copy before the price goes up!