When “Hemingway Style” Gets You Off-Track

When “Hemingway Style” Gets You Off-Track 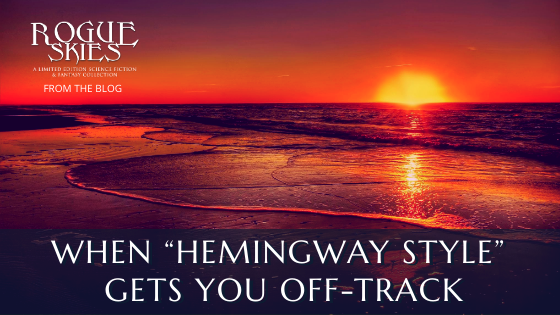 There’s an oft-quoted six-word story attributed to Hemingway that goes like this:

It turns out there’s no documented evidence to link this story to Hemingway, and it appears to have come from a play about his life. But it captures what we think of his style.

Hemingway made a lasting impact on American writers for a number of reasons and his influence is still with us today. We’re told that fewer adjectives and shorter sentences packed with depth are the way to go. Writers are advised to imitate him if they want to achieve higher quality in their work.

Hemingway was a brilliant writer and there’s much we can learn from him, but here are a few mistakes to watch out for.

Did you know there are apps that count how many times you use -ly adverbs in your writing? According to statistics, Hemingway used about 80 of them per 10,000 words.

Quick! Chop out all those adverbs as quickly, efficiently, and succinctly as possible!

Finding other ways to express the idea the adverb conveys does strengthen the imagery in writing and is a good idea. But cutting out most of your adverbs without understanding what they’re for would be superficial and could impoverish your work.

Why do we use adverbs that end in -ly? They often capture the narrator or main character’s point of view, you could even say opinion. If I write, “The man spoke,” and I add lots of description of his manner and the context in which he spoke, it says a lot. But if I add “sarcastically”, I’m expressing insight or opinion that might be difficult to convey any other way.

What do I want to communicate, and have I succeeded? If I make the goal cutting out adverbs, will I cheapen the scene? Am I adopting a hack-job approach to Hemingway’s skillful and talented style?

I’m not saying using an adverb is better. We just need to remember what the point is.

Look for ways to replace adverbs with something better.

Don’t just chop them all out.

This spare, carefully honed and polished writing style of Hemingway was by no means spontaneous. When he worked as a journalist, he learned to report facts crisply and succinctly. He was also an obsessive revisionist. It is reported that he wrote and rewrote all, or portions, of “The Old Man and the Sea” more than two hundred times before he was ready to release it for publication.

TIP: Write a scene adding adverbs that say what you’re trying to portray. Then go back, underline each one and ask yourself if there’s another way to demonstrate the idea without the word. This is just an exercise. There’s no need to make it into an inflexible rule.

Hemingway called his writing style the Iceberg Theory. Here is how he explained it.

If a writer of prose knows enough of what he is writing about he may omit things that he knows and the reader, if the writer is writing truly enough, will have a feeling of those things as strongly as though the writer had stated them. The dignity of movement of an ice-berg is due to only one-eighth of it being above water. A writer who omits things because he does not know them only makes hollow places in his writing

Ernest Hemingway in Death in the Afternoon

This is a beautiful theory and developing depth is a worthy goal. But we need to be careful not to lose the reader. There are huge differences in how people interpret context and the gap gets broader the farther away from “home” you go. Our ideas of the world are formed by our social and cultural backgrounds and the more restricted we are in how we describe something, the more likely we will hinder comprehension for many.

If I write, “She rose to her feet and faced the mailbox,” and the reader already knows she is being plagued by creditors, many will understand the dread and courage it takes her to face it. But so many cultural assumptions are made in that one sentence. The reader might picture paper bills delivered by the post office stamped with red warnings. Or are they emails with threatening subject lines and why would she rise to her feet for that? Or was the computer (or mailbox) behind her and she turned to face it because she heard a computer ding (or a P.O. delivery truck)?

The idea of a mailbox is relevant today in many countries, but what if tomorrow it becomes as unfamiliar as the pony express?

TIP: Look for places in your writing that require a lot of cultural context and find ways to enrich those descriptions.

Writers who spend time copying authors’ styles they admire and practice learning their techniques will benefit from the work it takes. But at some point, you need to branch out and be original. It would be a mistake to always go over your writing with a Hemingway Comb and whittle down anything you think is unworthy of him.

Being original requires risk, mistakes, a learning curve, a willingness to accept critique from people with good input. Humility.

TIP: Write something new that you consider original. Share it with three people you trust who have very different ideas of what makes good writing. Accept all the feedback and rewrite it. Try not to compare your work to other writing styles. Once you’ve addressed all the concerns, make a note of what you learned.

The baby shoe story relies on a great deal of unspoken context to work. It assumes that the reader is familiar with want-ads like the ones printed in newspapers where the cost depended on the number of words. It refers to a time when people spent a lot of money on well-made leather baby shoes that were often worn when the child took their first steps. These shoes were fitted by shoe-salespersons trained to measure people’s feet and figure out what they ought to wear.

Baby shoes that were never worn imply the death of the child they were bought for.

Most babies are taking their first steps in bare feet and there is little nostalgia attached to a pair of their shoes.

The baby shoe ad was clever when it was written. Today, many people might miss the point completely. The question to ask yourself as a writer is, how long do you want your work to last and how can you make that happen?

Writing is more about what you want to accomplish than what you intend to avoid.

Reading books by different people is a great way to find new inspiration for originality in your writing.

With “ROGUE SKIES” you can get 25 books by a variety of authors for only $0.99 for a limited time! Only two weeks left for preorders!