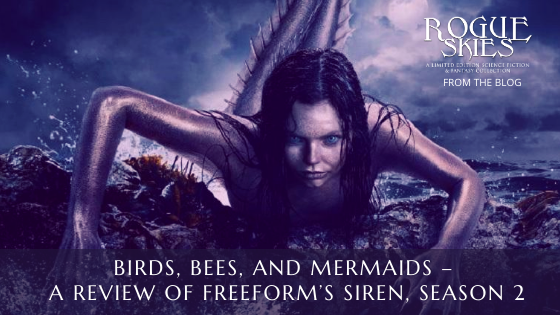 I had the pleasure of being on a fan panel for Siren at this year’s DragonCon, so my review includes both my own thoughts and those of my fellow panelists. We generally agreed on most of it with one notable exception, which I’ll discuss below.

By the way, there will be spoilers. 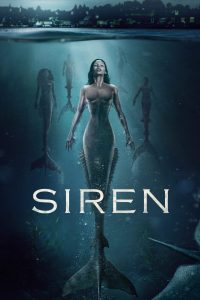 If you’re not familiar with it, the show revolves around the small Washington town of Bristol Cove, which has a strong mermaid legend. In fact, the town’s tie to mermaids is the main tourist attraction. Think Kristen Painter’s Nocturne Falls, but more focused and less romantic comedy. In season one, two mermaids came to Bristol Cove, one of whom the government captured and one who came looking for her. The human characters discovered that while mermaids may look human, they’re still very much animal. Murders, misunderstandings, and other complications ensue. When we left the characters at the end of season one, the main human guy Ben has the siren’s song stuck in his head, and we find it’s still affecting him negatively.

In this season, an oil company’s exploration of the ocean floor with sonic cannon has driven the main mermaid’s colony to the surface, so it’s up to Ben, his sometimes girlfriend Maddie, and mermaid descendant Helen to figure out what to do with seven more mermaids plus the original Ryn. Of course, things get complicated.

I can only imagine the casting call for the mermaid characters – “Looking for ridiculously good-looking people willing to wear bright blue contacts. Speaking demands minimal.” The mermaids don’t say much, so these actors had to do a lot with body language, expression, and hissing. I found them to be believable, and merman Levi, who had a not-so-nice role in season one, became a favorite. I especially liked how he wants to become human since mermaid culture is matriarchal, so he finds more freedom on land. He also discovers dancing and beer. It’s charming. The other merman, Sarge, also grew into his role. In fact, all of the new mermaids had well-developed personalities except one. 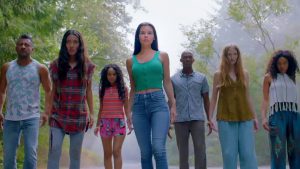 Other good cast additions included Navy sergeant Nicole, who starts dating Xander to find out more information about the mermaids. She starts out unsympathetic until we see how she becomes protective of Ryn. Another sympathy switch goes to reporter Ian, whom Calvin (e.g., “Dumber” of “Dumb and Dumber,” Hubby’s and my nicknames for Xander and Calvin) contacted at the end of season one. At their first meeting his season, Ian tells Calvin to call the National Enquirer, but then he gets curious. Then nosy. Then obsessed, even without hearing the siren song. He’s at the center of Ben’s Big Decision in the final episode of the season.

Finally, Maddie’s mom, who was offstage for season one, returns. She’s an addict and is trying so hard, but she still makes some bad decisions. The panelists all agreed that her plotline was handled well with a realistic portrayal of addiction and its effects on loved ones.

In terms of plot, the first half of the season (episodes one through eight) are tight, tense, and suspenseful. I would have been satisfied with the big mid-season finale. But there was more time to fill, which brings me to…

I had a similar complaint last season when episodes one through five had a great plotline and pacing. Unfortunately, the season had ten episodes. This time, the season had sixteen episodes, and as I mentioned, the first eight were great. In the second half of the season, we get dragged through mermaid reproductive issues, more about the creepy mermaid cult, who kill to keep their secrets but can’t manage basic security, and the strange disappearance of Nicole. It didn’t feel as tightly plotted, and the season finale lacked the same punch as the half-season finale. 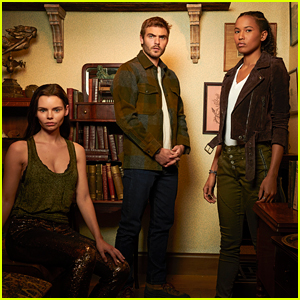 One good and bad development this season was Ben, Maddie, and Ryn becoming a “thruple.” This was a new term for me, and it means three people in a relationship. I guess we’re not calling it polyamory anymore? I don’t have an issue with the nontraditional relationship structure. They’re all consenting adults. It gets creepy when Maddie and Ben start acting parental toward Ryn, as in, they sometimes assert that they know what’s best for her without consulting her.

I’m also conserving judgment on the mermaid cult. They may have killed Helen’s parents. They certainly seemed to have a hand in causing the death of someone who knew them before he can pass along too much information to Helen. But then they turn sympathetic-ish and offer to help Ryn get pregnant through IVF. But they steal one of her embryos, and… We’ll just have to see where this goes next season. Plus, for a group willing to kill and kidnap, they failed miserably in keeping Ian the reporter out of their top-secret ritual.

Hubby told me he’s not sure he’ll watch season three. I may or may not give it a few episodes. Maybe I’ll just watch the first half of the season. I do recommend at least the first part of season two. If you watch the whole thing, I’d love to know your thoughts on the ending.